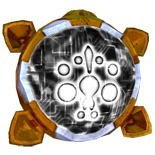 Starting at Level 1 it reads “All of your attacks heal you for 5.5% of the Damage done.”

Unlike the Amalgamous Prime Core which restores a percentage of health while the bot is in alternate mode, the Alchemist Prime Core restores health for both regular attacks and alternate mode. The higher the level of the core the greater health percentage restored. On offense, Alchemist, much like Megatronus, is a great core for leveling individual bots. As a bot progresses beyond L50, to reach the next level becomes increasingly difficult from a required XP perspective. At some point, the only reasonable way to progress is by playing the fewest number of bots in the highest zone possible. What Alchemist (and Megatronus) allow you do is potentially solo or duo (two bots) in battle zone 11/12 by attaching this Prime Core to Deathsaurus/Star Saber/Lugnut/Elita-1 and rush the HQ. Because of the constant restoration of health provided Alchemist, a L55 Deathsaurus/Star Saber/Lugnut/Elita-1 with ability level 8+ can easily solo zone 11. In a normal triple XP weekend event, this would provide roughly 28k (56k with XP core) of XP per battle for Deathsaurus/Star Saber. If you ran two bots in zone 11, in this scenario, both bots would receive 14k in XP (assuming triple XP; no XP core on second bot). This allows you to quickly acquire XP for purposes of bot leveling.

The Alchemist Prime Core is meant to provide the player selective/constant (when attacking) stream of health via various attacks (Basic and Special). This is very useful when self-leveling a bot. For example, with Deathsaurus/Star Saber/Lugnut/Elita-1, the player can rush the HQ ignoring all of the defenses. As Lugnut/Elita-1 run low on health, a timely usage of their Special Ability can restore a significant amount of health quickly. In conjunction with Basic and Special attacks, the Alchemist Prime Core can provide more health restored in a shorter timeframe than a standard Rejuvenate Power Core. While a standard Rejuvenate Power Core potentially provides more health restored over the duration of a three minute battle, if you are power leveling two bots in a high zone, the battle will not likely last the maximum duration. In the previous example, Alchemist will provide more health restored in the shorter timeframe. Alchemist can also be useful on war teams. As an example, attaching Alchemist to a gunner might allow a Medic, who changes the focus of their healing to the bot with the lowest percentage of health, to focus on healing front line bots vs the Gunner with Alchemist attached. Offensively speaking, bots that are best suited for the Alchemist Prime Core are those with high DPS and those with a Special Ability that does a large amount of damage. The more damage inflicted, the more health restored.

TFEW: Alpha Prime Shows How to Use the Quintus Prime Core Effectively