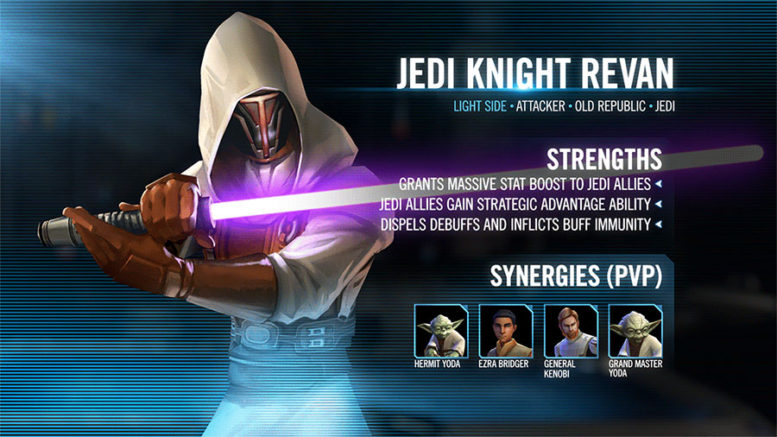 Welcome to the Best Mods for Jedi Knight Revan – the latest article in our series about the popular game Star Wars Galaxy of Heroes where we take a look at the best mods for all SWGoH characters. While I do not claim to have all of the answers in this game, I do my research and have used every toon I write about extensively. These are mod recommendations and they are certainly not the only option. However we look to help players maximize their characters in SWGoH and we are always open to hearing your feedback @GamingFansDFN on Twitter if you have a mod setup that works well in your own gameplay. 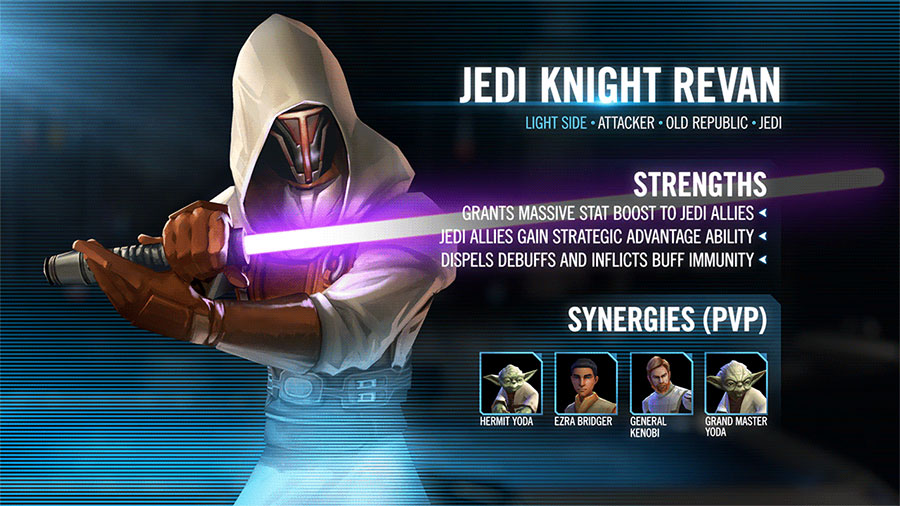 Today’s character to review mods for may be the most controversial character in all of Galaxy of Heroes – Jedi Knight Revan. A non-canon character who is from the popular Star Wars: Knights of the Old Republic game, JKR’s original announcement brought concerns of alienating the FTP & dolphins of SWGoH as well as praise from the SWGoH whales. Gaming-fans.com wrote a live blog of  the Legend of the Old Republic Ancient Event which took place for the first time in October 2018 as those players were the first to unlock Jedi Knight Revan. For now, let’s take a look at the best-suited mods for the Jedi Savior.

Main Focus: Speed. While Mods 2.0 gave other mod sets a needed boost, Speed in SWGoH is the necessary evil of Galaxy of Heroes and is not going away anytime soon. There really is no getting away from Speed, and JKR was a META-defining character with a crazy good kit on paper which needs Speed in order to make the most of it, but I chose to get that Speed from secondary stats and not a set of four Speed mods. If having the fastest Revan is your goal and necessary for your success, a set of four Speed mods will be necessary.

Additional Areas to Focus: Critical Chance, Critical Damage, Offense, Health, Defense, Potency and Tenacity. With such a large and complex kit there are a lot of areas to build upon, so this is where you need to be selective and hone in on a few areas to focus on instead of trying to do too much (unless your mods are that ridiculously awesome). Both his Master Strategist special and Hero unique increase Critical Damage and his Leader ability, General of the Old Republic, grants Revan and his Jedi and Old Republic allies increased Critical Chance, so look to build both stats. Offense will only help him hit harder, crit or not, so adding more Offense is logical. The Direct Focus special will benefit greatly by added Potency to ensure it is effective and Tenacity is gained from the Hero unique (Revan only) and his leader ability (Jedi and Old Republic allies). JKR’s Hero unique also grants him +10% Health and Defense (and +5% to all Light Side allies) which is all doubled when he is in the Leader slot, so look to boost both stats to maximize his survivability.

Speed Priority: 10/10 – Jedi Knight Revan is where I place my absolute best Speed mods as I have run him in the Arena since the release of Jedi Master Luke Skywalker in SWGoH. No matter the opponent, a fast Revan is a more effective Revan, so consider JKR for your top four Speed mods and another set that has fantastic Speed secondaries.

In-game Mod Recommendations: Offense and Critical Chance. My thoughts remained steady on this originally as I ran JKR with an Offense set of four plus a CC set with awesome Speed secondaries for a long time. However, in today’s SWGoH with JMLS and other fantastic Jedi now in the game, Jedi Knight Revan is the logical choice to get the battle going with the first turn and allow GAS, JKLS, JMLS and others handle the big hitting.

While I am a believer in putting the best mods on the best characters in the game, I also know that strategically you need to have characters modded to handle multiple situations in the game throughout the different game modes. Jedi Knight Revan is a character who can benefit nicely from a more offensive focus from mods, but endgames need him super fast. As a result I give you some options in my recommendation for the best mods for Jedi Knight Revan: