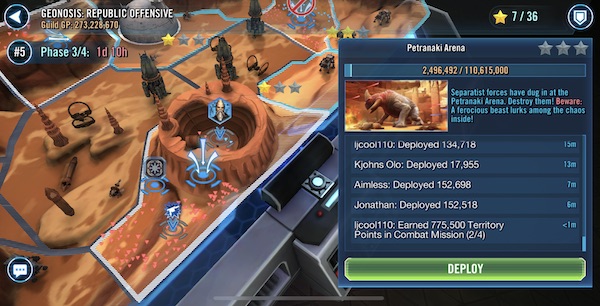 The following is a Walkthrough of my experiences in Phase 3 that will be updated over time. Phase 3 has five Combat Missions, including the Ki-Adi-Mundi shard mission, along with one of the Combat Missions requiring 7-star, 22,000+ power Jedi. Below is what I used on this specific mission:

01.20.20 – This battle may be the biggest display of how stupid this Territory Battle event as a whole really is. When characters who have $100 plus invested into them are one-shot or destroyed before taking a turn it shows you the lack of understanding from the developers in my opinion. This shows zero respect for the investments, whether recent or past, that players have made into the game.

After GMY is depleted and auto-revived by JKR’s leader ability, I start working on the B2 and lose JKR. After reviving him and getting all of my characters to near full-health and protection, the Geo Spy one-shots my Relic 2 Bastila. Now a 4 vs 3, I have JKR’s target on the Geo Spy as I look to remove him first, then the second Geo Soldier, leaving the MagnaGaurd until last. For now though, I am trying to space this out so that I can get another revive from Jolee before this wave is completed. I am able to time it right and go into the second wave with my full team.

The second wave of enemies features two B1s, a B1 Heavy Gunner, a Sniper Droid, a BX-series Commando Droid and a Geonosian Spy. Because of the Sniper Droid’s stacking offense, I target him with JKR and am able to take him out rather fast, but then the enemies get 8-10 attacks in leaving JKR and GMY barely alive. I am able to remove both B1s from the screen then lose GMY to the Geo Spy’s crazy attack. I take out the Heavy Gunner and then stun the Geo Spy and kill him as well, then Jolee revives GMY and I have just the Commando Droid left and my full team on the board. Now with 775,500 Territory Points, I move on.

The third wave of enemies is a full team of 5(+1) Geonosians with GBA at the lead. This battle proves to be about as difficult as they come, where I once again use JKR to target the GBA and try to remove him only to have zero success. JKR and GMY are killed rather quickly, and later revived, but the momentum is all in the enemy’s favor and I am down and out with 775,500 Territory Points to show for my efforts.

My Updated Roster of Jedi Heroes:

07.19.20 – After months off on the live blog/walkthrough I am back today in a strange situation. Of course most guilds stagger their efforts in this Territory Battle, coming to a score close to 1-star and then leaving it for the next phase of the event. As a result our middle territory is now closed off and I was late in attacking, so I have my full lineup available to his this Combat Mission. In the end I chose Hermit Yoda over Grand Master Yoda for the added survivability over more offense in this battle.

The first two waves of enemies were not terribly difficult to navigate through, although Geonosian Spies are just a pain in the butt to face in this event no matter how many Relics you have on your heroes. Use JKLS and GAS on this board means a lot of offensive firepower, and JKLS had some timely stuns in the first two waves.

The third wave of enemies includes a Sniper Droid, and I set things up well to have JKR up first and his Direct Focus special attack available. Had I not taken out the Sniper Droid first there is no way I could have survived this battle as I struggled keeping the the B1 and B2’s stacks from rising, but Jolee’s revives were the key as I eventually got the B2 down, and then the B1. After that I took out the Geo and worked on refreshing cool downs with basic attacks and allowed HYoda to heal before heading into the 4th and final wave of enemies.

The final wave of enemies featured two B1s, a B2, a BX-series Commando Droid and General Kalani. General Kalani has a unique called Calculated Approach which means that the B1s cannot lose more than 8 stacks in a single character’s turn and the B2s cannot lose more than a single stack, and this drastically changes the strategy in this battle. After targeting a B1 and realizing the error of my ways, I take a ton of hits and lose JKR, Jolee and GAS leaving just the Jedi Knight Luke and Hermit Yoda combo. I quickly switch gears to hitting the Commando Droid and with the mechanics of the assists and a well-timed heal, I take him out. However my blunder at the beginning of this battle is my downfall as I get killed scoring just 1,014,750 Territory Points for my Guild.