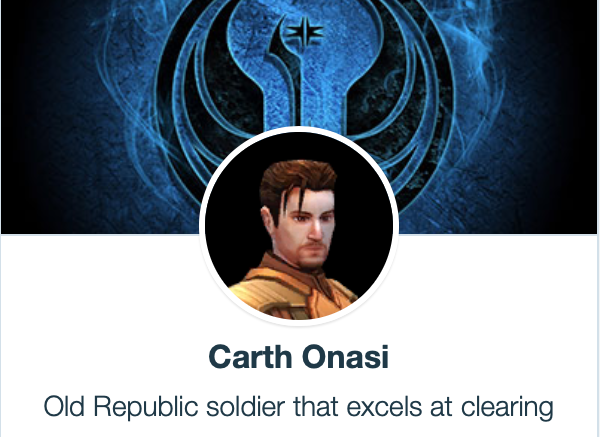 Welcome to Best Mods for Carth Onasi – the latest article in our series about the popular game Star Wars Galaxy of Heroes where we take a look at the best mods for SWGoH characters. While I do not claim to have all of the answers in this game, I do my research and have used every toon I write about extensively. These are mod recommendations based on the character’s kit and actual gameplay to help you in your quest to dominate the Galaxy of Heroes holotables. 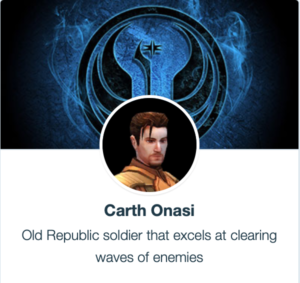 Main Focus: Speed. Carth’s kit on paper looks like a pre-Mods 2.0 character where Speed and getting multiple chances to attack are the keys. In actual game use the kit plays out as expected with critical hits and offensive boosts, but those attacks need to come more often forcing Speed to be the main focus. Given he has a base Speed of 171 which is, at the time of this writing, tied for 10th most in SWGoH, a Speed set is not a terrible idea, but I recommend gaining the extra Speed from the secondary stats of your mods.

Additional Areas to Focus: Offense, Critical Chance, Critical Damage, Potency and survivability in the forms of Health and Protection. Offense is a key stat for Carth Onasi given his Just Keep Shooting special grants Offense Up and he gains 10% Offense for each Old Republic ally. Thus, a high damage stat will be boosted which in turn boosts the damage output on all critical hits. Critical Chance and Critical Damage are of course important, but after the CD focus on the triangle mod you can leave that one alone in my opinion. CC is the stat to emphasize since Carth gains 15% Turn Meter for each crit from the Just Keep Shooting special. In addition, both CC and CD gain 10% stacking whenever Carth Onasi defeats an enemy, and his AoE cooldown gets reset, so using this wisely should play into your strategic use of Carth. Finally, these recommendations pair perfectly with Carth Onasi’s Relic upgrade in SWGoH which boosts his Damage, CC and CD stats significantly. Potency plays heavily into his basic, Rapid Shot, and Damage Over Time debuffs are very important after using a Zeta material on Carth Onasi’s Soldier of the Old Republic leader ability, so be sure to look to boost his Potency from secondary stats. Be sure to note that if you use Carth Onasi in the leader slot primarily, he does grant Old Republic characters 30% Potency, so overloading here is not necessary. Finally, Health and Protection are the two survivability stats I would recommend you focus on over Defense given that both numbers increase in-battle through the Zeta on his Soldier of the Old Republic leader ability.

In-game Mod Recommendations: Critical Damage & Potency. Given the number of Critical Avoidance characters in the game today and the ways that Carth Onasi benefits from Offense (which directly impacts Critical Damage in SWGoH), I think a set of four Offense mods is a significantly better choice. In addition, while Potency is important with Carth’s kit, only his basic is impacted by high Potency while Critical Chance is far more important for gaining more turns from the TM gains of critical hits on his Just Keep Shooting AoE special.

The “ideal mod setup” can be interpreted a few different ways. Based on the info above, I strongly recommend a set of four Offense mods and a set of two Critical Chance mods with as much Speed, CC and Potency possible to maximize Carth’s strong kit. Here are my recommendations for the best mods for Carth Onasi:

SWGoH: The Past, Present and Future of Star Wars Galaxy of Heroes