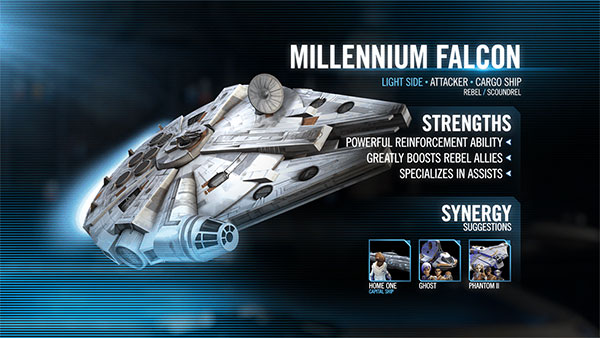 The Flight of the Falcon is set to begin in a few hours’ time where SWGoH will finally get to unlock and use Han’s Millennium Falcon. Piloted by (Raid) Han Solo and Chewbacca, the Millennium Falcon is expected to be a META changing ship and greatly enhance the Rebel fleets after the kit release by the SWGoH GameChangers earlier this week.

As with all Legendary and similar events, LJ, our Director of Content, will live blog the event to help give the community an idea of what to expect. Similar to his recent C-3PO event live blog, as well as the Thrawn, RJT and more, LJ will detail the character levels, gear levels, mods and in this case ship details for each four ships used in the event to (hopefully) unlock Han’s Millennium Falcon.

Details of the Live Blog attempts will be posted below. Keep checking back and hit “refresh” in your browser for updates to this page with all details below and be sure to add your comments below or Tweet them to @GamingFansDFN on your experiences as well.

First off, all of this will take place on my personal account, not the GameChangers account for reference.

Note that all Bounty Hunter characters listed are 7-stars and level 85 for reference.

Please hit refresh anytime after 5 am to see the most recent update(s).

Tier 1 – The start of the event features the Falcon and the four Bounty Hunter ships with a brief animation before three Star Destroyers appear out of hyperspace, then we have Plo Koon explaining about one of those Capital Ships – Vader’s Devastator. We start by facing the Falcon, a B-wing and a Y-wing. Using my default lineup of Hound’s Tooth, IG-2000 and Xanadu Blood with the Slave I as the reinforcement, the first battle provided little challenge, although Han’s Millennium Falcon dodged at least 3 attacks when is worth noting.

Tier 2 – Tier 2 proved to be quicker and easier than Tier 1.

Tier 4 – Tier 4 was the first where the battle lasted long enough to include my reinforcement ship, the Slave I. The evasion of Han’s MF has not felt nearly as high as it did on Tier 1 to this point. Another easy win.

Tier 5 – The speed of Han’s Millennium Falcon is evident in all of these as it attacks first in every battle – something to note for later. I take out the B-wing, followed by the Y-wing before both sides add a reinforcement. After removing the MF from battle the stealth A-wing is now no match for my ships, and Tier 5 is complete.

Tier 6 – Here is where I expect to see things start to get a bit more challenging. Using the same order, I take out the B-wing then start chipping away at the now bonus protection-heavy Rebel ships. The battle lasts longer than all others with both a A-wing and Wedge’s X-wing reinforcing, but while the Falcon is a bit of a pain in the butt to face, the outcome was never in doubt.

Tier 7 – And now the fun begins. Once again using my default lineup of Hound’s Tooth, IG-2000 and Xanadu Blood with the Slave I as the reinforcement, main animation replays and we are in battle. I focus first on the B-wing this time and cannot defeat it before the bonus protection and healing strengthen it back up, but finally do so when the Slave I enters. Now facing the A-wing, Y-wings and MF with my four Bounty Hunter ships, I am focused on the Y-wing which falls after 4 more hits. I use Vader’s special to stun the A-wing and a couple of attacks later it is a 1 vs. 4 match-up as everything is going my way. Hound’s Tooth finishes off Han’s Millennium Falcon and opens it at 7-stars for me.

SWGoH: Should I Buy the Clone Wars: Hunters Bundle (Embo and Cad Bane)

Be the first to comment on "SWGoH: Flight of the Falcon Legendary Ship Event Live Blog"