Opening Legendary characters is always important for competitive players and fans alike in Marvel Strike Force, and Phoenix is being billed about as highly as any character ever has in MSF. The dev team at FoxNext calls the X-Men the “Apex Arena Team” and Phoenix’s kit looks great, so those lucky players who unlock her will likely dominate the Arena for weeks to come.

As stated above, the initial Phoenix Rising event is expected to take place for the first time in late June 2019 and is expected to return in mid-September. You must beat all lower tiers before advancing to the next tier level. Legendary Character Events typically occur every two months and take place for 7 days initially and 3 days when they return.

My Roster (to start):

Tier 1 – Tier 1 has the four X-Men who have been in-game facing some Brotherhood and Hawkeye. After one blinded attack, Phoenix joins your party. Learning her abilities is the key here as this is much more difficult than expected in an annoying “why won’t you just die” for of way.

15 shards of Phoenix and 100 gold are your reward for beating Tier 1.

Tier 2 – Now it is time for this team of five Villain Mystic Controllers to battle. First Ravagers, then Kree are your 9 enemies as this board is a cakewalk.

Tier 3 – 14 enemies are the challenge with a mix of characters to fight and America Chavez and Phoenix joining you in the battle. Another easy battle for my squad.

Tier 4 – 16 enemies, many of them Hydra with a few Spider-Verse, are the challenge in Tier 3 and keeping Doctor Strange alive is the goal. As long as Doctor Strange stays alive the battle, at least for my characters, is not that bad.

Tier 5 – This battle features 15 enemies starting with Ultimus and 4 Kree Minions along with Scarlet Witch. I take out the Kree Royal Guard and Kree Oracle first, then Scarlet Witch and a Reaper before reinforcements arrive with Minn-erva and more. After a few more are killed off, Captain Marvel and another Minn-erva join as well as this battle is no joke. The addition of the second Minn-erva proves to be too much and I lose with 6 enemies remaining on-screen.

My Roster (after some upgrades):

Tier 5 – Let’s see if I can improve upon that poor performance last time… This time around my kill order is pretty much the same, with a focus on improved survivability and use of the special abilities so I am better prepared for the second Minn-erva. I did lose Nobu midway through the battle and Loki just as the second Minn-erva appears, my use of Phoenix is much improved helping add survivability and have more effective attacks. All the way to the last character standing this battle had a better feel as I get the win.

Tier 6 – I expect this to be extremely difficult and I doubt my team as constructed above will be able to beat this level. If I cannot beat this tonight in a few tries, this may take a few days as my weekend is crazy busy with the family and real life things.

The battle consists of many of the most annoying characters in Marvel Strike Force – Mordo, Juggernaut, HAND Sentry and Doctor Strange to name a few. My strategy is to get as many minions on the battlefield from Ronan and Loki to help out as possible, and then Dark Phoenix to get massive AoE attacks and use Mordo’s heal block to help my chances. This proves effective throughout as I somehow win. Honestly, I did not expect this kind of success or I would have detailed things a bit more… My thinking was eliminate Doctor Strange, HAND Sentry and Loki whenever they were on the screen. 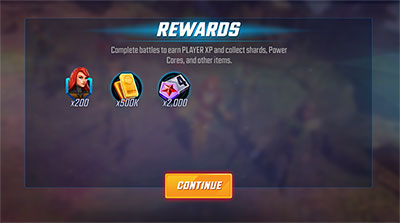 Tier 7 – TBD – Note that I will not be getting Phoenix at 7-stars this time around, but I will update this in the future when the time comes.

My Roster (after a few months):

Tier 7 – I was not able to qualify to fight for a 7-star Phoenix in the past, so we will see how much more difficult this tier is competitively.

With Phoenix and Scarlet Witch joining my five we face Phoenix, Captain Marvel, Mantis and Colossus to start, but this is a battle of stamina as you face 11 total enemies with Phoenix, Minn-erva, Doctor Strange and the Groot/Rocket combo – all on my Most Annoying MSF characters to face list. For me, keeping Phoenix alive as long as possible was the key. I got down to the end with Phoenix, HA, Mordo and Ronan against Groot and Colossus which proved to go as I wanted.

300 shards of Phoenix, 1m gold and 4k Elite 4 Credits are your reward for beating Tier 7.

Be the first to comment on "MSF: Unlocking Phoenix – Phoenix Rising Live Blog"

Use it for purchases at any Apple Store location, on the Apple Store app, apple.com, the App Store, iTunes, Apple Music, Apple TV, Apple News,…