Marvel Strike Force continues to evolve bring us creative new ways to gain shards of the many iconic characters from the Marvel universe. In addition to their normal character cadence with Offers, Events and the Blitz game mode to gain character shards, the addition of Captain Marvel to the game earlier this year introduced Milestones as a way to gain shards as well. While Mysterio also followed this new process, the latest version is a bit different using Blitz-specific milestones to unlock Namor. A character who is expected to be paired with the Fantastic Four for a nice synergy, Namor shards can be obtained from the new Blitz Milestones as well as the Marvel 80th Anniversary Orbs.

How can I unlock Namor faster? 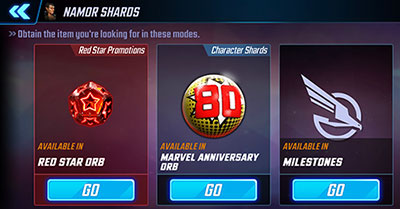 Looking to open/unlock Namor faster to add him to your roster as a playable character in Marvel Strike Force? Working together with your alliance is key to this. The Bombastic Blitz Milestones give 2 shards of Namor for each level, but they are not super easy to obtain. Basically, your alliance members need to use Marvel 80th Anniversary Characters in the Blitz mode, and WIN the battles, to get credit toward these specific Milestones. To gain points toward these Blitz Milestones you need the following:

So as you look at this, winning ANY Blitz battle will get you points, but the real gains come from winning with the specific Marvel 80th Anniversary character.

Who are the Marvel 80th Anniversary characters?

The Marvel 80th Anniversary characters eligible for the 20 points per use/win are the characters pictured at the top of the Bombastic Blitz screen. Thus, Captain America, Scarlet Witch, Doctor Strange, Storm and Spider-Man are all eligible heroes to score 20 points per battle, however they are not the ONLY characters eligible. A little bit of digging and you find that when you select “Marvel 80th” on the Character screen you will find a total of 22 characters are in this grouping. They include Black Panther, Black Widow, Captain America, Captain Marvel, Deadpool, Doctor Strange, Groot, Hawkeye, Hulk, Human Torch, Iron Man, Mister Fantastic, Ms. Marvel, Namor, Rocket Raccoon, Scarlet Witch, Spider-Man, Storm, Thanos, The Thing, Thor and Wolverine. As you can see this is quite a list!

If you do as I do and pair them up you can score as many as 103 points in a single battle. Of course we all do not have 7-star, Gear 13 version of these characters, however, especially in the early rounds of Blitz, putting a fivesome of 80th anniversary characters together is not going to hurt you much, especially if 2-3 of them are very strong. Another thing to consider, if you are like me and have a single team that is dominant and includes one of these five, you can score 23 points per win no matter the enemy difficulty.

One thing to note on this is that this is a 2-week Milestone. Basically, if you did not score well during this current Blitz, you have several days remaining to use this fivesome to score you and your alliance some big points in upcoming Blitz battles.

Be the first to comment on "MSF: How to Unlock & Power Up Namor"