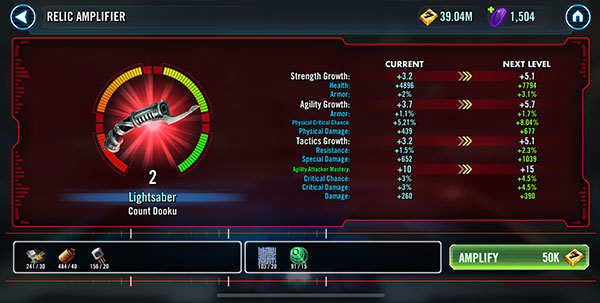 Continuing the Relic Review series, we take a look at Count Dooku’s Relic upgrades and the impact it has on the game. As always these reviews compare a character at Gear 13, Relic Level 0 with Relic Level 7, and mods are not factored in.

Defensively, Count Dooku gets a very nice Health boost of 19,440 which is on the higher end of the Relic increases. Given all characters except for the Top 13 get between 16,812 and 19,746 this is not a huge advantage over the field, but it is a nice gain nonetheless. While Dooku does not gain any Protection, he does receive an above average 13.38% increase in Armor and a rather low 6.86% increase in Resistance. This surprisingly rounds out his defensive gains as he does not gain any Deflection or Dodge Chance, nor does he add any Physical or Critical Avoidance.

On the offensive side, Count Dooku, aka Darth Tyranus, is a rare dealer of both Physical Damage and Special Damage. His Lightsaber basic attack deals Physical Damage where he sees the game’s biggest increase from any Relic upgrade as he more than doubles his Physical Damage to 5,091. His Force Lightning special attack deals Special Damage and also get a huge boost of over 120% bringing him to 6,880 total at a Level 7 Relic. Looking at Physical Critical Chance, Dooku once again gets a huge boost as he nearly doubles his Physical CC to 66.47% while his Special Critical Chance increases to 32.67%. In addition to these, he also gets a 13.5% increase in Critical Damage to ensure those more frequent crits are hitting harder. That is where the increases stop as Dooku does not gain any Accuracy, Health Steal, Resistance Penetration or Armor Penetration.

As we look at Count Dooku’s place in today’s SWGoH, he saw a significant increase in importance from his recent rework and resulting required use in the Geonosis: Separatist Might Territory Battles. However, even at Gear 12+ I found him to be rather squishy and this does not drastically change that. While the offensive boost will no doubt be significant, you have to be a big Count Dooku fan or just highly value him in other areas of the game to rank him above most of the field.

Because of the items mentioned above I am rating Count Dooku’s Relic as a Medium Priority as there are many other characters that I will be prioritizing before this Sith Lord.

Be the first to comment on "SWGoH Relic Review: Count Dooku"