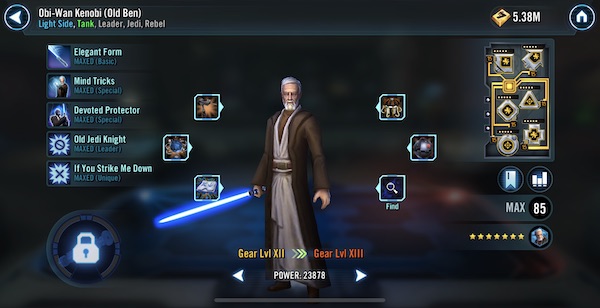 Continuing the Relic Review series, this article will take a look at Obi-Wan Kenobi (Old Ben) and his Relic, the Lightsaber. As always these reviews compare a character at Relic level 0 to Relic level 7 and mods are not factored in.

To start off, Obi-Wan Kenobi gains a strong Health increase of 19,746. His 9.46% Armor increase is respectable but his 3.96% Resistance boost is underwhelming. He also receives an additional 9,900 Protection.

On the offensive side Kenobi gains a below average Physical Damage increase of 1,535 along with a 15.58% Physical Critical Chance increase. Finally, he receives a 6.75% Health Steal boost.

Old Ben is a versatile tank with both the Jedi and the Rebel tag who can fit in a variety of teams and slow down enemy teams with debuffs and turn meter reduction. In addition, he has the valuable aspect of not needing much Speed thanks to the turn meter gains from his unique ability and first special. Because of the moderately strong stat increases from his Relic and his overall usefulness, I am putting Obi-Wan Kenobi (Old Ben) in the upper end of the Medium Priority tier.

Be the first to comment on "SWGoH Relic Review: Obi-Wan Kenobi (Old Ben)"