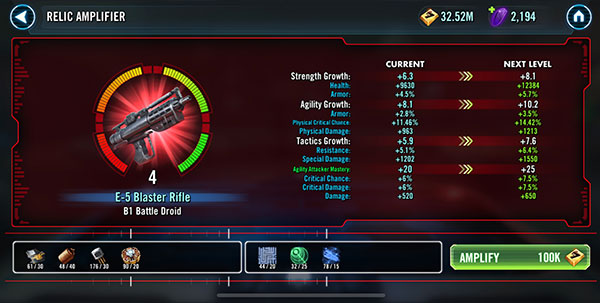 Continuing our SWGoH Relic Review series, this article will take a look at the B1 Battle Droid and his Relic, the E-5 Blaster Rifle. As always, these reviews compare a character at Gear 13 with Relic level 0 to Relic level 7, and mods are not factored in.

This post will be unusually short because the increases to Health, Special Damage, Armor, Resistance, Physical Critical Chance, Critical Damage, and Special Critical Damage from B1’s relic will not affect him due to his unique kit. For anyone that is unfamiliar, B1 is unable to crit, he doesn’t deal Special Damage, and his Health and Protection total is set to 1. Why the devs gave him so many unusable stats is beyond me. The main reason to level B1’s relic would be for the significant Physical Damage gain of 2,883, bringing his total to 7,090.

Even though the Physical Damage boost above is quite impressive and B1 is a key character on a Separatist Droid team and highly valuable in the Dark Side Geonosis Territory Battles, nearly every stat increase on his Relic goes to waste. Based on these stats and gameplay testing by our staff, B1’s Relic is in our Medium to Low Priority tier instead of the High Priority status B1 Battle Droid deserves.