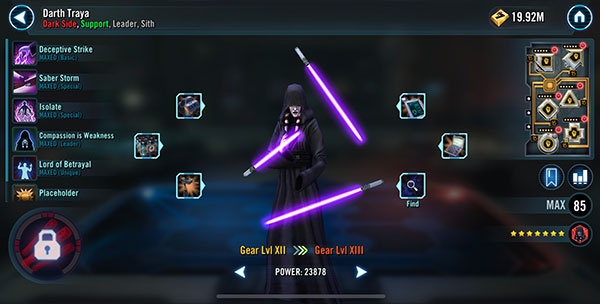 Continuing the Relic Review series, this article will take a look at Darth Traya and her relic, a trio of lightsabers. As always, these reviews compare a character at Relic level 0 to Relic level 7 and mod enhancements are not factored in.

The offensive gains from Traya’s Relic are quite disappointing. While she does see a 3,336 Special Damage increase, this is the main stat boost. Traya’s Relic adds no Special Critical Chance despite her base stat being very low at just over 20%. The only other offensive gain is a 13.5% Special Accuracy increase. However, because Traya’s specials can’t be evaded, this only benefits her basic ability. Because Traya only deals Special Damage, the increases to her Physical Damage, Physical Critical Chance and Physical Accuracy should be ignored.

Darth Traya is the leader of the Sith Triumvirate, one of the most versatile squads in the game across several game modes. Unfortunately, the stat increases from her Relic are overall fairly disappointing. Because of these factors, I place her Relic around the middle of the Medium Priority tier. There are many Relics I plan to level before Darth Traya’s.

Be the first to comment on "SWGoH Relic Review: Darth Traya"