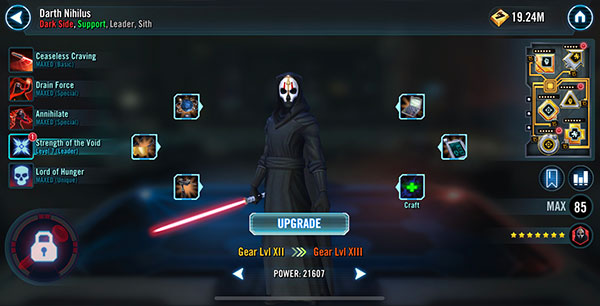 Continuing the Relic Review series, this article will focus on Darth Nihilus and his relic, his lightsaber. As always, these reviews compare a character at Relic level 0 to Relic level 7 and mods are not factored in.

First off, Darth Nihilus gains an above average Health increase of 19,440, bringing his total to 50,785. This is complemented well by his 11.59% Armor increase and 6.57% Resistance increase.

While Darth Nihilus is not valued for his damage output (not counting Annihilate), his offensive gains are still worth mentioning. His Special Damage increases by 2,592, giving him a total of 7,271 which enhances his basic attack and its ability to dispels buffs as well as his special ability which can increase cooldowns. The 13.5% Special Accuracy boost Nihilus receives helps ensure these abilities aren’t evaded. In addition Darth Nihilus gains an increase of 90 to both Armor Penetrarion and Resistance Penetration. Finally, he sees a 6.75% Health Steal increase. Because Nihilus only deals Special Damage, the increases to his Physical Damage, Physical Critical Chance, and Physical Accuracy will be ignored.

Darth Nihilus is a key member of the Sith Triumvirate, a Darth Traya led team that has high value and versatility across the game. However, Nihilus’s Relic doesn’t have a significant effect on the Sith Lord. Because of these factors, I place his relic in the Medium Priority tier.

Be the first to comment on "SWGoH Relic Review: Darth Nihilus"