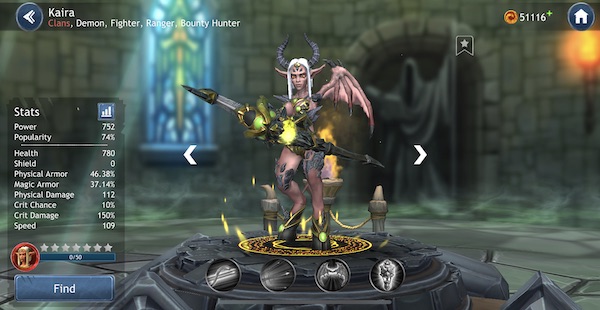 Welcome to the latest article in our series about Runes in Dragon Champions. As we have with other mobile games, our staff will review the best Runes for DC characters, those ability enhancing materials that strengthen your characters and give you the competitive advantage in PVE and PVP modes. While we do not claim to have all of the answers in this game, we do our research and have used every character we write about in an effort to best understand which Runes are the best fit for their abilities.

Kaira is a very versatile character, able to dish out a lot of damage and also able to give the team buffs while also dishing out important ones. I play her with Speed, Potency and damage. I like Speed so that she can, with the help of the Potency, dish out that important ability block to start. This can get you a very nice head start and stop enemies from taunting and giving out other buffs or heals. She also works very well with Venomate, as you will see in both their kits. Kaira is a nice character to have on your team, and highly frustrating to face in battle.

These 2 abilities are where the potency is very nice to have on her. You want enough potency to be able to ensure that you are able to land these debuffs, especially when facing a team that can taunt and heal a lot.

Note that Speed is very important here as having Kaira take her turn ASAP is key toward protecting your team  and letting the tank take the damage while you set up your battle. These two do go hand in hand. You give her the extra damage (and Venomate) as fast as possible, and since they both have AOE attacks, you can dish out a lot of damage fairly quickly.

The “ideal rune setup” can be interpreted a few different ways. If you target Speed it will help set up the battle in your favor. Thus, here are my recommendations for the best runes for Kaira the Bounty Hunting Demon:

Cubs Fan Han: Is Dragon Champions for Real?! Why So Many SWGoH Players Switched

Be the first to comment on "Dragon Champions: Best Runes for Kaira"