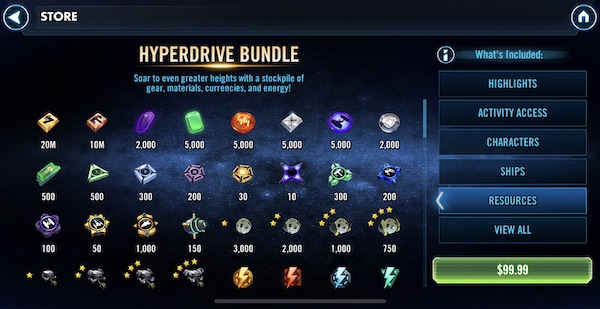 The Hyperdrive Bundle is one of the latest additions to Star Wars Galaxy of Heroes and is described by EA Capital Games as their “most broadly-focused player bundle” they have ever offered. Announced in late November along with the addition of the Journey Guide in SWGoH, the goal of the Hyperdrive Bundle is to reward “characters and resources to both new and veteran players allowing them the ability to level up their collections and jump into some of the most exciting content in-game.” While the view of this December 2015 player who has not missed a day of SWGoH in 4 years is not the same as others, I admit that I am certainly NOT the target audience. However, for my son’s account, which has basically become an alt for me, where he is at Level 81 running a Phoenix team in the Squad Arena and has only Grand Master Yoda from the Legendary characters in the game, I can see where something like this would be a great boost.

A few more words from CG from when they first announced the Hyperdrive Bundle:

And finally, the bundle will also unlock many of the PvE nodes within the game so that players new and old alike will have the flexibility to chase the characters and resources they’ve always wanted more freely, and with the help from the Journey Guide, they’ll know which path to follow.

We intend this bundle to be a convenient method for players to unlock the full experience of Galaxy of Heroes but as always, the content within this bundle can be acquired even if you don’t spend. We’ll be preparing custom titles and portraits for all the amazing players that were in the game before the bundle was released, as a way of recognizing your place in the history of the game.

What do I get in the Hyperdrive Bundle?

Note that this does NOT provide character or ship shards. For midgame or endgame players looking for tons of Shard Store currency this pack will not reward them the shards of the characters listed.

Overall, this $100 investment skips 8-12 months of grinding, all of which remains intact for those looking to stay Free To Play (FTP). For the Pay To Play (PTP) in SWGoH, the value is in the gear as many of these gear pieces cost, when you break it down and buy them individually, much more than $100 when you add it all up.

Should I Buy the Hyperdrive Bundle?

This question is all about where you are in the game and how willing you are to drop $100 on a mobile game. For me at 5.7m GP, the value is in the gear. I have to answer whether or not I want to invest this money into more gear for my characters or not and will the other resources make me strong enough to justify the expense. Comparatively speaking, the value is as good as I have seen in Star Wars Galaxy of Heroes.

If you are a Pay To Play (PTP) midgame player looking to “catch up” this can help a little, but not a lot. Again, I would ask myself if this purchase was more “bang for my buck” than others in the game (it is) and decide from there if I want to drop $100 or not.

For early game players, if being PTP is not a debate and dropping $100 on a mobile game does not bother you, this is a nice catch-up mechanic for sure. You will be able to shave off 8-12 months of the tedious grind of SWGoH that is really about the most boring part of the game, and you can start unlocking key legendary characters while building your roster for others. It will also allow you to jump up the competitive ladder and seek out more competitive guilds to help accelerate your progression even more.

For more perspective on the Hyperdrive Bundle, click here to view former SWGoH GameChanger AhnaldT101’s video breaking it down.