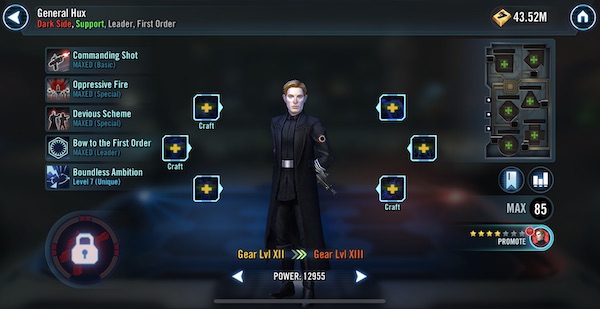 Welcome to the Best Mods for General Hux, the latest article in our series about Star Wars Galaxy of Heroes where we take a look at the best mods for individual characters. While I do not claim to have all of the answers in this game, I do my research and have used every toon I write about extensively. These are mod recommendations based on the character’s kit and actual gameplay to help you in your quest to dominate the Galaxy of Heroes holotables. 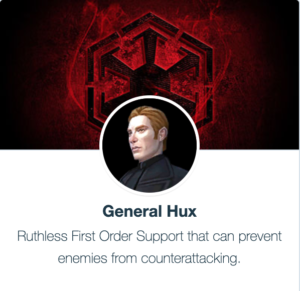 Today’s toon to review mods for will be the General Hux, a Dark Side Support character who was finally added to SWGoH just before the debut of The Rise of Skywalker in December 2019. While his kit is not terribly complex, it does add to the value of his First Order teammates. Let’s take a look at how we want to mod General Hux below.

Main Focus: While almost every character needs Speed in SWGoH, General Hux is much like First Order Officer in the fact that they need to be super fast to be effective. AhnaldT101 showed a video of FOO and Hux working together shortly after Hux was added to the game, but odds are we will see more First Order characters who change the strategy to some extent. My recommendation is to make General Hux the fastest member of your First Order team and benefit from his leadership and nice kit.

Additional Areas to Focus: Offense, Critical Damage and survivability. General Hux has just one attack where he himself does damage – his Commanding Shot basic. While his Special Damage stat is high, note that Speed secondaries should be your focus first to allow Hux to use this nice kit. After the Speed, adding Offense and Critical Damage will help that basic attack hit harder, especially given the fact that he will (hopefully) have Advantage often. In addition, you want to keep General Hux alive, so add to his survivability stats – Defense, Health, Protection and Tenacity. As DBofficial125 states in his First Order Zeta priority guide, “he is very soft so Hux will need help from Defence mods and some Critical Avoidance.” In addition, Tenacity, specifically, will help avoid the Ability Block and Buff Immunity that can derail General Hux, so boosting this seems wise. Note that solid survivability stats are gained in the Relic upgrade for General Hux, but survivability needs to continue to be a focus from his mods as this does not alter the mod strategy.

In-game Mod Recommendations: Speed & Tenacity. No major disagreement here, but keeping Hux alive is a high priority and could be viewed as more important than the higher Tenacity, thus fast Defense mods should also be in play.

I am choosing to go with a set of 4 Speed mods and 2 Tenacity mods to gain as much as possible in these two areas, and because I have some solid mod fits for my General Hux. Here is my preferred mod setup for General Hux:

Be the first to comment on "SWGoH: Best Mods for General Hux"