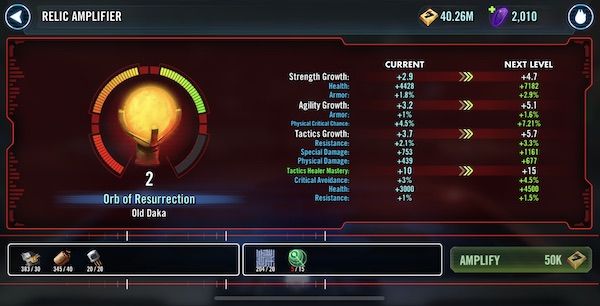 Continuing the Relic Review series, this article will take a look at Old Daka and her Relic, the Orb of Resurrection. As always, these reviews compare a character at Relic level 0 to Relic level 7 and mods are not factored in.

First off, Old Daka gets one of the highest Health gains in the game from the upgrade of her Relic with +31,698 Health. She is one of just 13 characters to get a huge Health boost as this brings her total to 76,391. Better yet, the Health increase pairs well with her 11.83% Armor increase and 12.75% Resistance gain. Given Speed and Health are the recommendations we make for the best mods for Old Daka, and you can really take this stat even farther. In addition she sees a 13.5% boost to both Physical Critical Avoidance and Special Critical Avoidance.

Even though Old Daka isn’t valued as a character because of her damage output, the 1,630 Physical Damage boost and 18% increase to Physical Critical Chance are very nice additions. Because Old Daka only deals physical damage, the increase to her Special Damage can be ignored.

Old Daka is key to a good Nightsister team because of her ability to constantly revive her Nightsister allies and stun enemies. Her Zeta ability gives her 10% Maximum Health (stacking) whenever an ally revives and this ability greatly improves the already massive Health increase from her Relic. She may not be a top meta character, but an Old Daka with a massive and constantly increasing health pool will make Nightsisters a nightmare to deal with. Overall I am impressed by the stat increases from Old Daka’s Relic and I put her around the middle of the High Priority tier.

Be the first to comment on "SWGoH Relic Review: Old Daka"