The Grand Arena Championship is a piece of content that visual Content Creators, like the bulk of the former SWGoH (and still current EA) GameChangers, love to cover. Showing the match-ups of PVP on a Live Stream, often with whale or kraken level accounts, is content that viewers tend to very much enjoy. While the Grand Arena remains a topic that this site has yet to master, we do have plans in place to up our GAC coverage moving forward as Star Wars Galaxy of Heroes continues to evolve. 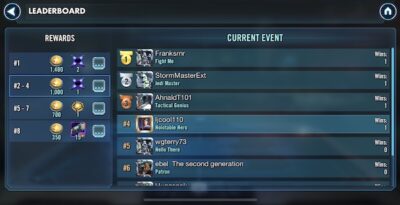 In the Grand Arena Championships my 6 million Galactic Power account often gets matched up with many of the game’s best and most powerful players. While I win more than I lose, I am no GAC expert. However in this GAC, I have to be honest, I did not pay a lot of attention to the first round and my opponent placed a defensive set that challenged me a bit, but when he got hung up on my Emperor Palpatine/BSF/Darth Malak team I knew I had the win in hand. After that 2,433-1,924 victory, my second round opponent, StormMasterExt, went light on defense in (probable) hopes of beating me on efficiency. However, while we both cleared the other’s defense, I am walking away with a 2,460-2,448 win to move on the to the championships of this 8-man bracket. But when I first looked at my pool of opponents this morning, on familiar name caught my eye – AhnaldT101. 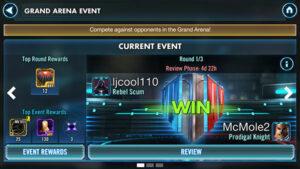 While Ahnald is not the first familiar name I have ever been in the same bracket as in the GAC, this could be my first match-up in the Championship round with such a high-profile opponent. Of course it was back in April when I was able to top former GameChanger McMole2.

So how will this GAC play out? Ahnald plans to live stream his GAC offensive battles later today which we will gladly link to once we have that info. Of course if we face off in the Championship round I plan to cover that and I am sure Ahnald will as well.

Here is a look at what we can find:

5 pm ET Update: No luck on the match-up or the proposed (on Reddit) Pay-Per-View. Annald had a tough matchup with a 600k punch-up to face Franksrnr, while I will only be down 300k. Now my hope is that Frank does not watch his stream or read the site so that I know what is coming tomorrow…