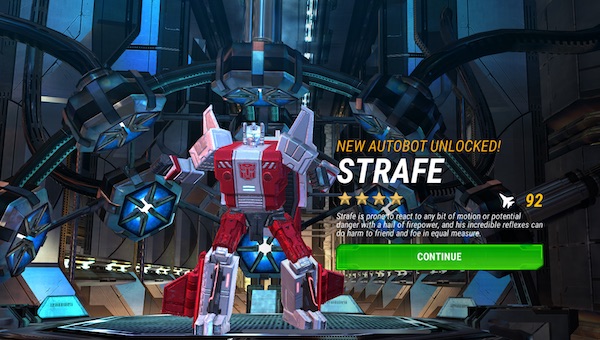 Aerial attackers Strafe & Thrust joined Transformers: Earth Wars in January 2020 with Strafe serving as a Technobot and a member of the faction that creates the combiner Computron. With a special ability called Berserker that reads, “Go berserk on their defences for 10 seconds dealing damage and reflecting 20% of the damage back to your attackers.” On paper, this sounds like a rather interesting special attack. In actual gameplay it works a lot like Sentius Magnus & Sentius Malus only without the decreased damage taken and with a higher Damage Per Second (DPS). So which Power Cores are best for Strafe & Thrust and ensure this special ability is enhanced?

Amalgamous Prime Core – Strafe & Thrust are bots that really fit well into two of the best Prime Cores in the game – the Amalgamous Prime Core and Alchemist Prime Cores. The tough part about this recommendation is 1) availability and 2) bot prioritization. Both the Alchemist Prime Core and the Amalgamous Prime Core are reserved for high-end war bots and while Strafe & Thrust have the potential to be part of any player’s war team, it will be a while before the non-whales (95%+ of the players of TFEW) have the new bot ready for that level of play. In addition, most players in Transformers Earth Wars have many other bots that take priority for those specific cores. As a result this is a tough choice to make given the need for the healing from these two cores. The Berserker ability, while strong with a high DPS, will leave your bot exposed in the air and the healing from these Prime Cores is almost necessary to ensure you get the most out of this offensive potential. The Reflective Coating is also in play, and likely to be the most common choice or players, given the protection against Laser Turrets and Beam Lasers so that Strafe & Thrust are not a sitting ducks for your enemy’s defense.

Special thanks to b0dhi74 of the Scorched Earth family for his input on this and many of the revised Best Power Core articles.

Be the first to comment on "TFEW: Best Power Cores for Strafe & Thrust"