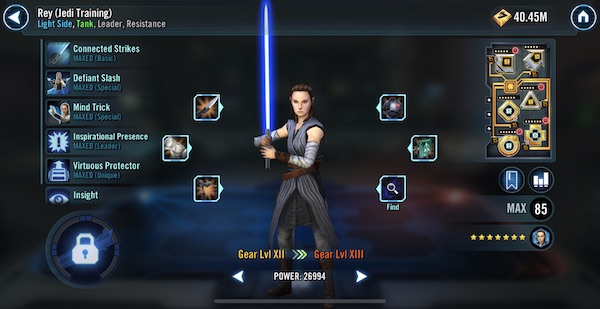 In another addition to the Relic Review series, this article will take a look at Rey (Jedi Training) and her Relic, the Lightsaber. As always these reviews compare a character at Relic level 0 to Relic level 7 and mods are not factored in.

Starting off Rey (Jedi Training) gains an excellent Health increase of 24,840. She gains a 9.91% Armor increase and an 11.3% Resistance increase, both respectable numbers. She receives a high 15.75% increase to both Dodge Chance and Deflection Chance which synergizes well with her unique Insight. She also gains a rare 9,900 Protection bump reserved for tanks.

On the offensive side Rey (Jedi Training) gains only two stat increases. The first is a 1,512 Physical Damage increase and the second is an 18% Physical Critical Chance increase. Because RJT only deals Physical Damage, the increases to her Special Damage can be ignored.

RJT is already a great character and the best Resistance leader in the game at the time of this writing. In addition, the stat increases from her Relic are very good, especially on the defensive side. However, the biggest factor is that she is required at Relic level 7 to unlock her Galactic Legend version. Because of these considerations, I am putting Rey (Jedi Training) in the middle area of the High Priority tier. If it is not a priority, Rey is in the lower group of the High Priority tier.