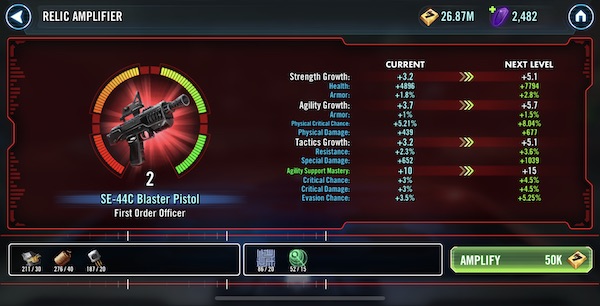 In another addition to the Relic Review series, this article will take a look at First Order Officer and his Relic, the SE-44C Blaster Pistol. As always these reviews compare a character at Relic level 0 to Relic level 7 and mods are not factored in.

First Order Officer gains a solid 19,440 Health increase. The 11.25% Armor and 9.47% Resistance increases are very good as well given he is squishy at lower levels in SWGoH. He also gains a very useful 15.75% increase to both Dodge Chance and Deflection Chance.

First Order Officer only fits in a First Order team and whether he is a top five member is debatable. Also, the stat increases from his Relic are overall average at best. The key factor is that FOO must be at Relic level 5 in order to compete to unlock the Galactic Legend version of Kylo Ren. If that is important to you, this is a middle area of the High Priority tier pick. If you disregard First Order Officer being needed for the new Kylo Ren, he is in the lower area of the Middle Priority tier.

Be the first to comment on "SWGoH Relic Review: First Order Officer"