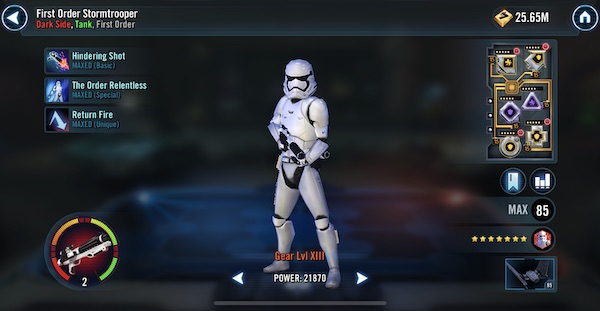 In this edition of the Relic Review series, we will look at First Order Stormtrooper (or FOST as most people know him) and his Relic, the F-11D Blaster Rifle. As always, these reviews compare a character at Relic level 0 to Relic level 7 and mods are not factored in.

Starting off FOST gains an above average Health increase of 19,728. While his 10.15% Armor increase is about average, the 4.35% Resistance bump is quite disappointing. He also receives an additional 9,900 Protection to add to his survivability.

On the offensive side First Order Stormtrooper gains a below average Physical Damage increase of 1,535. He also sees a 15.58% Physical Critical Chance increase and a 6.75% Health Steal boost.

While First Order Stormtrooper is an excellent tank on a First Order team, the stat increases from his Relic are overall disappointing. By himself, the Relic belongs in the lower end of the Medium Priority tier, but if unlocking Galactic Legend Kylo Ren is important to you, this Relic moves to the middle area of the High Priority tier.

Be the first to comment on "SWGoH Relic Review: First Order Stormtrooper"