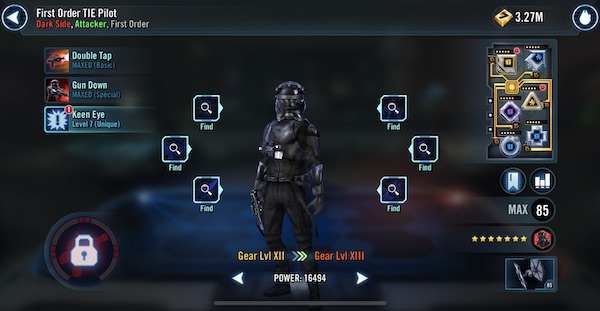 In another addition to the Relic Review series, this article will look at First Order TIE Pilot and his Relic, the SE-44C Blaster Pistol. As always these reviews compare a character at Relic level 0 to Relic level 7 and mods are not factored in.

Looking first at survivability, First Order TIE Pilot gains an average Health increase of 17,892. However his Armor and Resistance increases are both impressive, at 13.47% and 9.95% respectively.

On the offensive side FOTP gains a strong Physical Damage increase of 2,884. While his 33.92% Physical Critical Chance increase would usually be very valuable, Pilot already gains an extra 30% Critical Chance from his unique and frequently gains Advantage so it’s value is diminished. Finally he gains a 13.5% Critical Damage boost.

First Order TIE Pilot has a fair amount of usability within a First Order team. While he is not a top option, the solid stat increases from his Relic improve his role as a damage dealer. I am putting his Relic in the middle area of the Middle Priority tier. If it is important to you that he is needed to unlock Galactic Legend Kylo Ren, this Relic moves to the middle area of the High Priority tier.