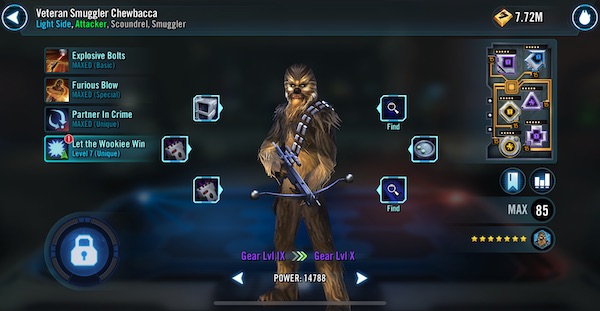 Continuing the Relic Review series, we take a look at Veteran Smuggler Chewbacca’s Relic and the impact it has on the game. As always these reviews compare a character at Gear 13, Relic Level 0 with Relic Level 7, and mods are not factored in.

Defensively, Veteran Smuggler Chewbacca gets a very strong Health boost of 19,786, which brings him to just over 60k Health in total. While his defensive Armor stat gets a 10.06% increase, he gets a 7.93% gain in Resistance gain which are both average gains adding to his survivability.

On the offensive side, Veteran Smuggler Chewbacca gains a strong 2,706 Physical Damage from upgrading him to Relic level 7. While he does have see a Special Damage gain of 3,762, we can ignore this stat increase since he only deals Physical Damage, thus making this a wasted stat. A 18% Physical Critical Chance gain increase is a very nice addition to bring him to 51.71% CC when maxed out. Given the fact that Critical Chance and Critical Damage are two main areas of focus for mods on Veteran Smuggler Chewbacca, this stat gain is quite important. VS Chewie also gains 13.5% additional Physical & Special Accuracy as well as +90 Armor & Resistance Penetration to ensure his attacks hit even harder.

As we look at Veteran Smuggler Chewbacca’s place in today’s SWGoH, he is basically a worthless character that Capital Games is using to suck money out of their whales and those who care about the new Galactic Legend events. As long as players like myself are dumb enough to give in to CG’s requirements and dump money into characters like Veteran Smuggler Han Solo, Rose Tico and VS Chewie, they will continue to do so and we will continue to waste valuable resources on characters that only hurt our Grand Arena Championships chances (by inflating Galactic Power on unused characters). That having been said, look to Gaming-fans.com and our talented YouTube friends for ways to better used these characters in other game modes.

Overall, I will say that I am slightly impressed with the gains that Veteran Smuggler Chewbacca receives from his Relic upgrades, as they will certainly help his survivability in SWGoH and increase his damage significantly. That having been said, his Relic simply cannot be prioritized ahead of 95% of the characters in this game placing him in the Low Priority category. Of course if you are chasing Galactic Legend Rey this moves him to the bottom of the High Priority tier, but there’s really no other reason to even consider using your gear and Relic materials on VS Chewie otherwise.