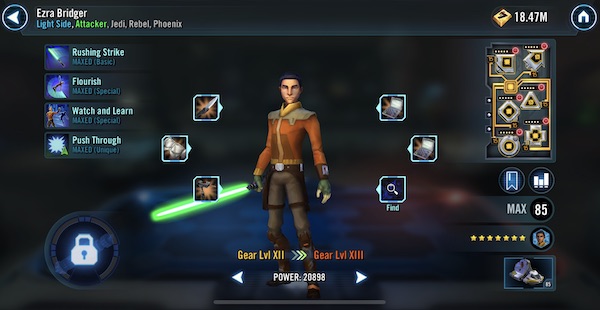 In another addition to the Relic Review series, this article will focus on Ezra Bridger and his Relic, a Lightsaber. As always these reviews compare a character from Relic level 0 to Relic level 7 and mods are not factored in.

First off Ezra gains an average Health increase of 17,892. He also receives an additional 10.43% Armor and 6.87% Resistance, both respectable numbers to add to his survivability.

On the offensive side Ezra gains a large 2,884 Physical Damage increase. He also sees a 13.5% Critical Damage bump and an extremely large Physical Critical Chance boost of 33.92%. Note that this CC increase puts him at 79.25% Physical CC before mods, so be aware of this when you mod Ezra Bridger in SWGoH.

Ezra Bridger is a fairly good attacker who benefits greatly from his Relic. In addition, he has high versatility since he has both the Jedi and the Rebel tag. While he isn’t a top choice for either faction, he is one of the first backups one would think of. Because of these factors I am putting him in the middle area of the Medium Priority tier.