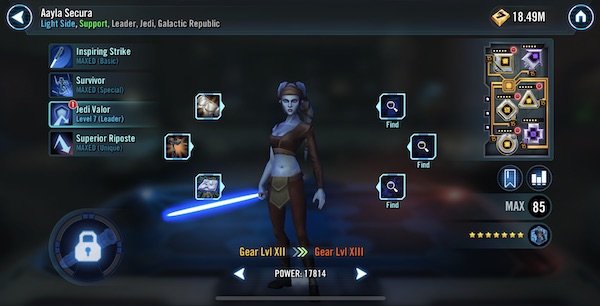 In another entry to the Relic Review series, this article will take a look at Aayla Secura and her Relic, a Lightsaber. As always these reviews compare a character at Relic level 0 to Relic level 7 and mods are not factored in.

First off, the Rutian Twi’lek Jedi Master and General Aayla Secura gains a strong Health increase of 19,440. In addition her Armor and Resistance increases are both very impressive, 13.03% and 10.61% respectively.

Looking at the offensive side, Aayla Secura gains a very disappointing Physical Damage increase of 1512. Her Physical Critical Chance increase is middle-of-the-road at 18%. She recieves a 13.5% Physical Accuracy boost along with a 6.75% Health Steal bump. Finally, she gains an additional 90 Armor Penetration and Resistance Penetration.

Aayla Secura’s stat increases from her Relic are average at best. While having both the Jedi and the Galactic Republic tag allows her to be placed under two very strong leaders in Padme and Jedi Knight Revan, Aayla’s viability is fairly low because of how outdated her kit is, and these Relic upgrades do nothing to change that. In addition, after seeing how her stats increase from Gear 13 and Relics being added, it may change how to mod Aayala Secura given the lack of a highly offensive focus. If the rumored Galactic Republic Jedi rework comes true, Aayla would be a staple in the Light Side Geonosis Territory Battle but until then she will be in the lower end of the Medium Priority tier.