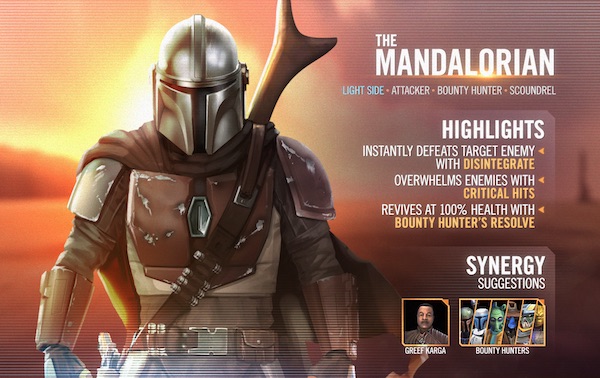 In another entry to the Relic Review series, this article will take a look at The Mandalorian and his Relic, The Mandalorian’s Helmet. As always these reviews compare a character at Relic level 0 to Relic level 7 and mods are not factored in.

Starting off Mando gains an overall average Health increase of 17,892, one of the secondary areas of focus in the best mods for The Mandalorian in SWGoH. Because he has two lives, the actual Health increase is really 35,784, so be sure to factor this in. His Armor and Resistance increases are both highly impressive, 14.1% and 10.26% respectively.

The Mandalorian is a strong attacker and an excellent addition to any Bounty Hunter squad. On top of having very strong stat increases from his Relic, Mando is also only the second character in the game with an Instant Kill ability, greatly increasing the viability of Bounty Hunters as a team. While Mando unfortunately can’t be used with nearly all of the Bounty Hunters in Territory Battles because of his Light Side tag, he still earns a spot in the lower end of the High Priority tier.

Be the first to comment on "SWGoH Relic Review: The Mandalorian"