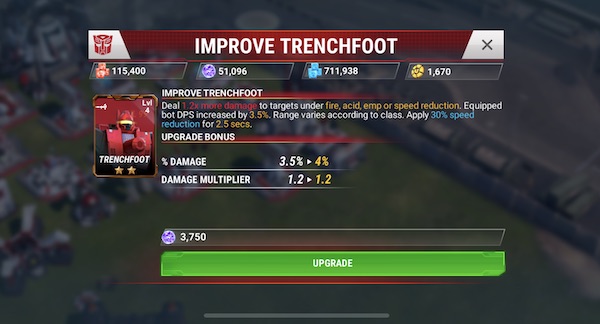 While the second weekend in July brought us the Parallel Processors event in Transformers: Earth Wars, the most exciting news of the weekend for Pay-to-Play (PTP) and endgame players is the addition of two new COMBAT Bots to the game. Trenchfoot (Autobot) and Caliburst (Decepticon) we added to the game and we will provide out recommendation for the best bots to equip Trenchfoot & Caliburst below. Note that these are recommendations based on the abilities listed in-game as well as actual gameplay, so while they may not be the only options we do encourage discussion on the topic on Twitter @GamingFansDFN.

Trenchfoot & Caliburst both boost the damage of the equipped bot and deal additional damage “to targets under fire, acid, amp or speed reduction.” When equipped on a bot who either applies these debuffs to targets or fights alongside bots who do this, these bots appear ready to disrupt bases of all levels in TFEW. Let’s take a look at some of the best bots in TFEW to equip these COMBAT bots on.

As we look at the inventory of bots who make the most sense to equip Trenchfoot & Caliburst we have to keep in mind that using a bot equipped with either alongside a bot who applies the listed debuffs – fire, acid, emp or speed reduction – can be just as effective. Note this does not include Glass Gas, thus meaning Cliffjumper/Kickback and Sideswipe/Offroad are NOT on this best bots list. Also worth mentioning is that Trenchfoot & Caliburst are limited in who can equip them as well, as bots like Star Saber/Deathsaurus stand out as an obvious choice but are not options. 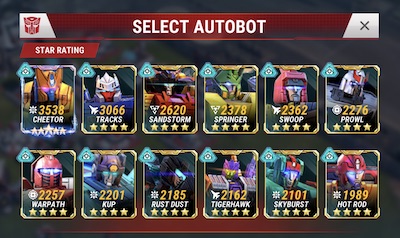 These bots that can equip Trenchfoot & Caliburst include, but are not limited to the following:

When reviewing this list, while Aerial attackers are included I simply do not like the idea of using Trenchfoot & Caliburst with these bots given they often attack at range in an effort to destroy the target, thus negating the need and use of the COMBAT bots and their abilities. A gunner like Mirage fits nicely because he rarely destroys a target with a single use of his special attack. Overall, Bumblebee/Skrapnel, Chromia/Fellbat, Mirage/Breakdown, Punch/Counterpunch, Rust Dust/Scavenger, Sixgun/Triggerhappy and Sunstreaker/Swindle feel like the best fits if you feel the need to equip these COMBAT bots with a bot who has a complementary ability, or consider using Trenchfoot & Caliburst on a bot used alongside the popular Star Saber/Deathsaurus with a Megatronus Prime Core and see where that takes you.

TFEW: Prime Core Shards on the line this weekend in Nexus Prime event

Be the first to comment on "TFEW: Best Bots to Equip Trenchfoot & Caliburst"