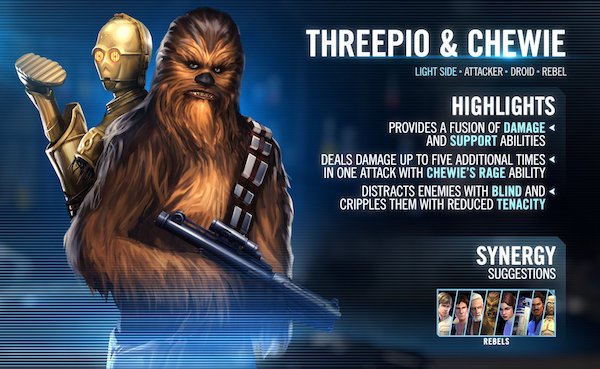 Continuing the Relic Review series, this article will take a look at Threepio and Chewie, or Chewpo as I like to call this character, and the associated Relic, C-3PO’s Broken Parts. As always these reviews compare a character from Relic level 0 to Relic level 7 and mods are not factored in.

Starting off, Threepio and Chewie gains an above average Health increase of 19,746. He also gains strong increases to both Armor and Resistance, 11.49% and 8.83% respectively.

On the offensive side Chewpo gains 2,706 Physical Damage as well as a strong 18% Physical Critical Chance increase. He receives an increase of 90 to Armor Penetration and Resistance Penetration in addition to a 13.5% Physical Accuracy boost.

While Chewpo is a fairly new character, he is proving to be an extremely strong addition to the Rebel faction throughout several game modes, especially when paired with C-3PO. His secondary Droid tag increases his potential and versatility as well and his Relic stat gains pair well with the best mods for Threepio & Chewie. On top of the high usability and value from his kit, the stat increases from Chewpo’s Relic complements him well as an Attacker. I am placing him in the lower end of the High Priority tier.