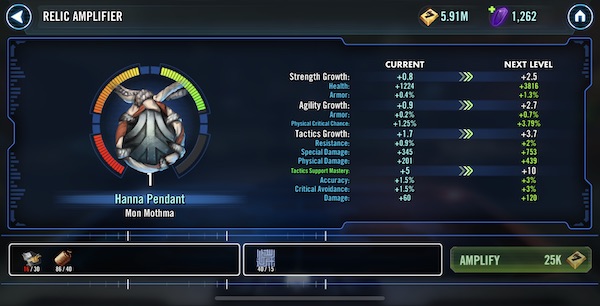 For Mon Mothma, her Hanna Pendant is her Relic in SWGoH. Her statistics impacted include Health, Physical & Special Damage, Armor, Resistance, Physical Critical Chance and finally Critical Avoidance & Accuracy from her Mastery.

To start off, Mon Mothma gains a rather meager Health increase of 16,830. Given we recommend Speed as well as Tenacity or Health mods on Mon Mothma to best enhance her abilities, the gains from his Relic upgrade will be quite helpful to her kit despite the less-than-impressive increase. Her 9.77% Armor increase is not very impressive and near the bottom of all SWGoH characters, and the 8.37% Resistance increase is middle-of-the-road. In addition, a 13.5% boost in both Physical & Special Critical Avoidance should not be overlooked.

Mon Mothma is a creatively designed character who was released in July 2020, just a few weeks after another fantastic character design in Threepio & Chewie. Her role in SWGoH is to breathe life into a dead segment of the Rebel faction as the Rebel Fighter category was created when she was added to the game. While she does indeed make them much more relevant and improves survivability tremendously, the offensive output of the Rebel Fighter faction leaves a lot to be desired at the time of this article. Overall, based on the stats above and her role in today’s Galaxy of Heroes, Mon Mothma’s Relic belongs in the middle to upper area of the Medium Priority tier.

Be the first to comment on "SWGoH Relic Review: Mon Mothma"