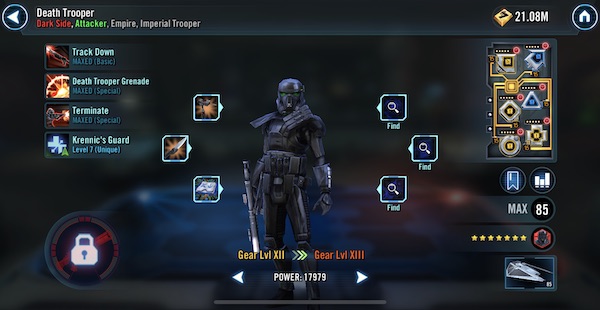 In the latest edition of the Relic Review series, this article will look at Death Trooper and his Relic, the E-11D Blaster Rifle. As always these reviews compare a character at Relic level 0 to Relic level 7 and mods are not factored in.

To start, Death Trooper gains a strong Health increase of 19,746. Equally impressive are his 11.63% Armor and 9.72% Resistance increases.

On the offensive side Death Trooper gains an above average Physical Damage increase of 2,706 but his 17.96% Physical Critical Chance boost is about middle of the road. He also receives an additional 90 Armor Penetration and Resistance Penetration. Finally, he gains a 13.5% bump to Physical Accuracy which is especially valuable considering his first special can increase cooldowns on the entire enemy team and his second special can inflict Deathmark on a single target.

Death Trooper fits very well on most Empire or Imperial Trooper lineups but he has excellent versatility. His basic can stun and daze, his AoE can apply Heal Immunity, dispel buffs, and increase cooldowns, and his second special can apply Deathmark and prevent revives. The wide variety of debuffs and control make him an excellent character overall. The stat increases from his Relic complement him well and give him a strong (and much needed) damage increase. Because of these factors I am placing him in the lower end of the High Priority tier.

Be the first to comment on "SWGoH Relic Review: Death Trooper"