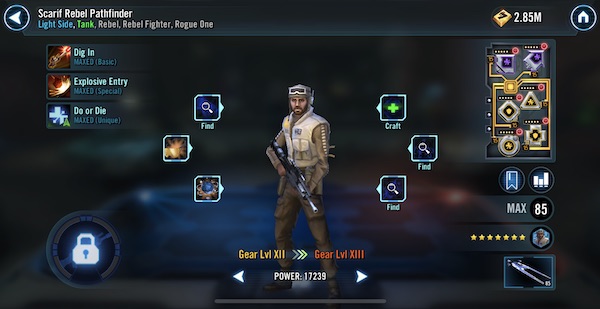 In another addition to the Relic Review series, this article will look at Scarif Rebel Pathfinder and his Relic, the A300 Blaster Rifle. As always these reviews compare a character at Relic level 0 to Relic level 7 and mods are not factored in.

To start off Scarif Rebel Pathfinder, aka SRP, gains an above average Health increase of 19,746. While his 3.47% Resistance boost is underwhelming, his 11% Armor increase makes up for it. He also receives an additional 9,900 Protection in his role as a tank and all of these are stats we recommend you enhance in the Scarif Rebel Pathfinder mods guide.

On the offensive side SRP gains an expected, but below average 1,536 Physical Damage increase as well as a 15.58% Physical Critical Chance boost. Finally, he gains a 6.75% Health Steal bump.

Scarif Rebel Pathfinder is a durable tank that can fit on several different Rebel teams and he has a reliable revive mechanic which makes him especially difficult to get around. In addition he pilots an excellent ship that is key to any strong Rebel fleet and is one of 15 characters with the newly-added Rebel Fighter tag. When you also factor in the respectable stat increases from his Relic, I feel that SRP belongs in the upper area of the High Priority tier.

Be the first to comment on "SWGoH Relic Review: Scarif Rebel Pathfinder"