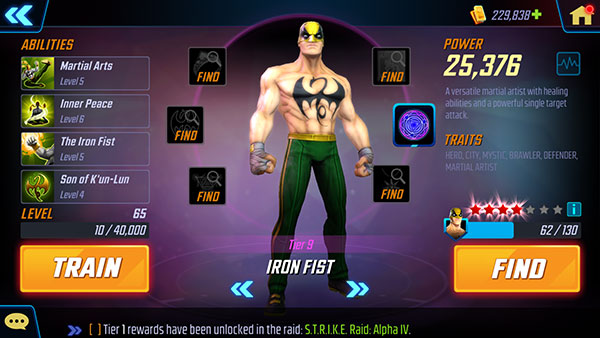 Welcome to the Iso-8 guide for Iron Fist, the latest in our series about the popular game Marvel Strike Force. In this series we look at the best Iso-8 enhancements for MSF characters. While some may refer to Iso-8 as simply “mods” like in other mobile games, we will look to stay true to the naming convention of the Marvel universe and the developers over at Scopely. We at Gaming-fans.com certainly do not claim to have all of the answers in this game, but we do our research and look to use every hero and villain we write about extensively. These are Iso-8 recommendations based on the character’s kit and actual gameplay to help you in your quest to dominate in Marvel Strike Force. Note that these Iso-8 classes may differ from one team makeup to another, so feel free use this as guide knowing that these can change in differing situations within MSF’s gameplay.

Today’s character to review is Iron Fist. The of the star of the Iron Fist series on Netflix and Marvel’s Iron Fist comic book series, Iron Fist is a Hero, City, Mystic, Brawler and Martial Artist character in Marvel Strike Force, as well as a member of the popular Defenders team. However 2021 has seen Iron Fist join the new Heroes for Hire faction which changes where he is used, even if not how he is used. Let’s take a look at the stats we want to focus on enhancing now that Iso-8 modifications have been added to the game.

Main Iso-8 Focus: Health. Iron Fist is a solid character who can do some decent damage, but his value lies in his ability to heal his teammates and keep them on the attack. His Inner Peace special heals himself and his Defender or Heroes for Hire allies, but has a flat heal rate plus 30% of his Max Health. While Iso-8 does not allow for a lot of customization, adding the Health crystal (top) and getting to levels 2 and 4 (Gain +10% Max Health) are where you will see the biggest gains for this character, as well as his teammates.

Now that we know how Iso-8 works in Marvel Strike Force, as a progression system with some customization for the characters, we can see that all characters gain Max Health at levels 2 and 4 in addition to the more custom stats. That having been said, the Iso-8 class that fits Iron Fist best is the Healer class. Given the makeup of the Defenders (plus Punisher) team, unless you trade roles with Jessica Jones, it is most logical to have Iron Fist fit his true role with this team and continue to be the healing presence. If using Iron fist on the H4H team with Luke Cage, Shang-Chi, etc., this really does not change as the annoyance in facing this team in War is their ability to heal back up and dispel debuffs with ease. I recommend you keep Iron Fist as a healer to maximize your team’s survivability.