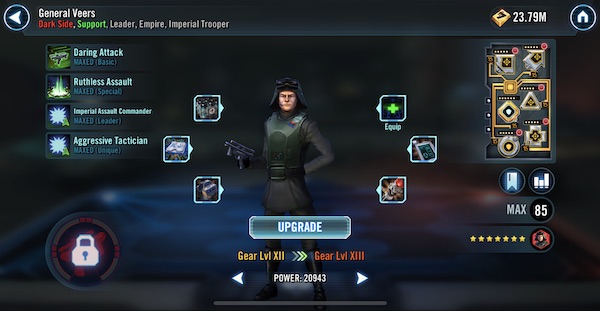 Continuing the SWGoH Relic Review series, this article will look at General Veers and his Relic, the SE-14R Blaster Pistol. As always these reviews compare a character at Relic level 0 to Relic level 7 and mods are not factored in.

To start off General Veers gains a below average Health increase of 16,812. However his strong Armor and Resistance increases (13.24% and 8.1% respectively) make up for this nicely. In addition he receives a 13.5% boost to both Physical Critical Avoidance and Special Critical Avoidance.

On the offensive side General Veers gains an additional 2,169 Physical Damage and 3,333 Special Damage as well as a moderate 16.58% Physical Critical Chance boost. Finally, he gains a 13.5% bump to Physical Accuracy and Special Accuracy.

General Veers is essential to any Imperial Trooper team with the massive amount of Turn Meter he can allow the team to gain. While Imperial Troopers have lost viability in recent times, the newly released Admiral Piett appears to greatly increase the team’s strength and usability. In addition, General Veers has become a requirement for the Galactic Legend Sith Eternal Emperor event. Overall Veers belongs in the upper end of the Medium Priority tier.