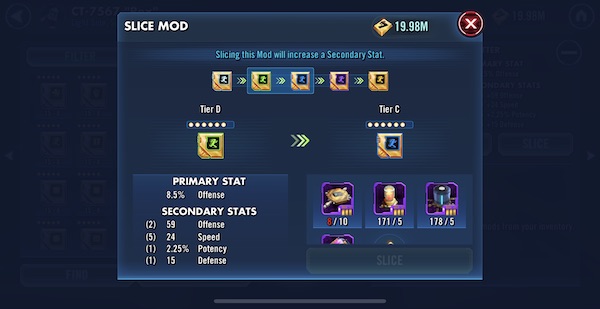 While EA Capital Games announced the ability to slice 6-dot mods at the beginning of this month, the immediate thought by any in-the-know player of Star Wars Galaxy of Heroes is “can this increase speed on my characters?” The answer is a simple “yes.” But understanding how the slicing of our 6-dot mods works is the key to success, like many things in SWGoH, so we have gathered some resources to complement our popular Best Mods in SWGoH section to help players across the globe. 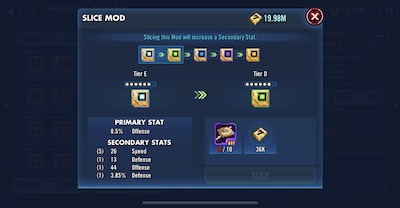 To begin, slicing a 6-dot mod is just like slicing other mods, with one key item to note. For any mod that has already rolled an upgrade to the same stat 5 times, you have a 0% chance of that stat being upgraded again. See the image on the right for reference, where the speed secondary on this offense mod has already rolled 5 times.

As AhnaldT101 points out in the videos I have linked below, if speed is the main goal of your slicing efforts, finding the mods that have rolled a speed upgrade 4 times is where you want to focus. The speed mod used as the feature image for this article is a great example of this, where speed had already rolled 4 times prior to gaining another 5 speed after securing the material in last weekend’s Galactic Challenges event. For the visual learners in the world, here are two links to Ahnald videos.

My personal strategy heading into slicing these already high-value mods is to find the absolute best mods on my top characters, regardless of speed, and click those to have the most impact in my battles. Yes, speed will be a major factor in determining this, but I will not allow this to limit me to just chasing the high speed secondaries.

Lead epic Viking raids against Saxon troops and fortresses. Relive the visceral fighting style of the Vikings as you dual-wield powerful weapons. Challenge yourself with…