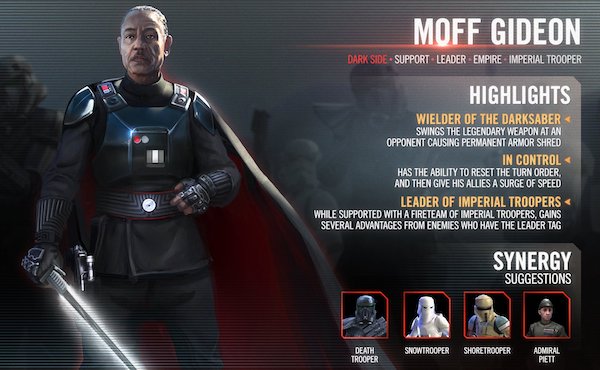 The details of Moff Gideon’s arrival to the Holotables were released earlier this week as Star Wars Galaxy of Heroes continues to stick with The Mandalorian theme, making multiple callbacks to Season 1. As we have stated with past updates from non-movie Star Wars canon content (see Star Wars s Rebels content in 2017), the rules, at least in the past, are that EA Capital Games can release content from previously completed seasons of Start Wars content. Thus, we received Star Wars Rebels content in 2017, while Season 4 was airing, and we are now receiving Season 1 content from The Mandalorian as Season 2 is just past the midway point.

Here is a quick look at some of what EA Capital Games released:

Moff Gideon has arrived to impose his will on the Holotables! The formidable Moff, once an officer in the Imperial Security Bureau and now wielder of the legendary Mandalorian Darksaber, uses his unique talents to lead Imperial Troopers into battle.

Always tactical and looking for every advantage, Moff Gideon controls the battlefield by utilizing AoE attacks, Turn Meter manipulation, and applying both Daze and a new debuff that leaves his foes Demoralized.

With the Darksaber in hand, Moff Gideon turns his attention to chasing down the Child. Use his unrelenting focus and astute battlefield knowledge to lead your squad of Imperial Troopers onto the Holotables and bring glory to the Empire by unlocking Moff Gideon in an all-new Marquee event.

For the entire write-up by the devs on Moff Gideon click here, or to view Moff Gideon’s SWGoH character kit, click here. In addition, our Best Mods guide for Moff Gideon is already in the works and will be posted shortly.