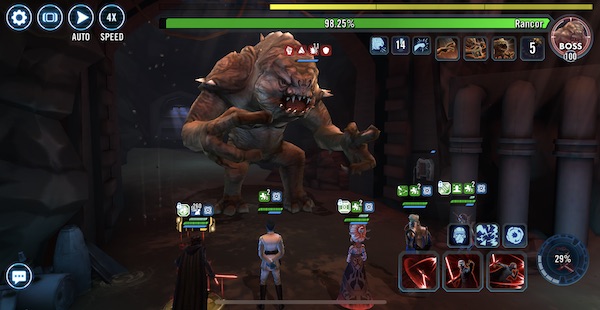 The Challenge Tier of the Rancor Raid in SWGoH, officially known as The Pit (Challenge): The Rancor Unleashed, was released just a few short days ago and offers a new level of challenge when facing the Rancor monster. After years of laughing at the ease of beating the Rancor, Galaxy of Heroes players across the globe are being smacked in the face with this new challenge, and most of us welcome it.

As my own guild tries to figure out how to best navigate the Rancor (Challenge) edition, I am working on building our own Guide for the event to help players throughout the new version of this old Raid. In those efforts I saw one of my guild mates post that specific characters are well worth the investment, leading to the list below. In it, I will list SWGoH heroes who are not Galactic Legend characters that are wise investments for this Raid, as well as in other game modes in Star Wars Galaxy of Heroes. The Galactic Legend characters are a given that they should be key pieces to top teams for the Rancor (Challenge), even though I am not hearing anything good about Sith Eternal Emperor in the early going. Let’s take a look at 5 characters in SWGoH who are well worth the Relic 5 investment needed for this Raid.

Call her what you want, zBarriss or Zarriss, it does not matter as this character is one of the few early SWGoH heroes to stand the test of time and continue to remain relevant, one way or another. Early in the game it was because of her healing, then because of her newly-added Zeta ability, and most recently that combination has proven valuable for Rey-led teams in Territory War, Territory Battles and the Grand Arena Championships. Now, again, we have Zarriss gaining relevance with a lot of versatility in the Rancor (Challenge) Raid.

Even more valuable than his counterpart R2-D2, C-3PO has flexibility throughout SWGoH that is nearly unmatched – unless you keep reading. C-3PO fits well on Padme Amidala teams (another great investment), Rebel teams in other game modes, and Resistance teams as well as all-Droid teams. In addition, C-3PO is required at Relic 5 to unlock Jedi Master Luke Skywalker, so the value in upgrading his Relic is high.

Possibly the Dark Side’s most flexible character with only Wat Tambor in the same class in SWGoH, Grand Admiral Thrawn has been a top character since his introduction to the game in mid-2017, and with a Relic 6 requirement to unlock Sith Eternal Emperor there is about as much value in upgrading Grand Admiral Thrawn’s Relic as anyone in the game today.

Once upon a time, EA Capital Games told the community that Wampa and Hermit Yoda would never be required for any character because of the barrier for acquiring their shards (Guild Events Store). When Jedi Knight Luke Skywalker was added to the game in mid-2020, that statement proved to be false as both were required at Relic 3. In addition, CG then olaced HYoda as a Relic 5 requirement for Jedi Master Luke Skywalker. While Wampa is a terrible deal in this, Hermit Yoda is a worthwhile investment of your gear and Relic materials. His versatility in the game sees him alongside Jedi Master Luke, Jedi Knight Luke, Jedi Knight Revan, Supreme Leader Kylo Ren and more. The jump from Relic 3 to Relic 5 is not one that most endgame players will be bothered by as most likely have Hermit Yoda there already.

This Separatist may have more uses in-game than any character in Star Wars Galaxy of Heroes, making waves in past months to counter Galactic Legends, and he appears in my (December 2015) Arena shard amongst the Top 20 players regularly. His value is high already as the prize in the Dark Side Geonosis Territory Battle and in battle on that map, and given his use in Galactic Legend counter teams in Territory Wars and the Grand Arena Championships, upgrading Wat Tambor is a wise investment of resources for any SWGoH player.

SWGoH: Raid Simming – A Breakdown of the Rewards