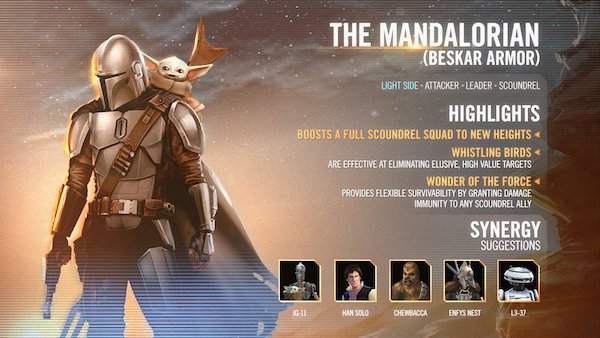 Welcome to the best mods for The Mandalorian (Beskar Armor), the latest article in our series about the popular game Star Wars Galaxy of Heroes where we take a look at the best mods for each SWGoH character. While I do not claim to have all of the answers in this game, I do my research and have used every character I write about extensively. These are mod recommendations and they are certainly not the only option. However we look to help players maximize their characters in SWGoH and we are always open to feedback if you have a mod setup that works well for your gameplay. 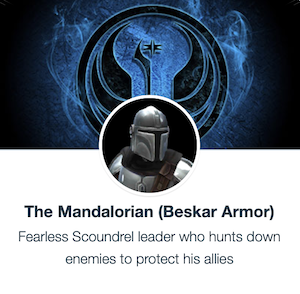 Main Focus: Offense. Yeah, not Speed. Weird huh? The Mandalorian (Beskar Armor) has a kit that, unlike the original The Mandalorian in SWGoH, is actually designed not to rely on critical hits. As a result, stay away from the Critical Chance and Critical Damage mods here and look to use an Offense set on this version of Mando. Note that he deals True Damage, defined as “ignores Defense but can’t critically hit), much like HK-47, so when you have mods with high Offense in the secondary stats, he is a good character to place those on.

Additional Areas to Focus: Speed, Potency & Tenacity and survivability in the form of Health and Protection. The Mandalorian (Beskar Armor) has a kit that is designed to debuff enemies and deal True Damage, mentioned above as “ignores Defense but can’t critically hit.” As a result adding Potency will help him land Damage Over Time on his basic and Healing Immunity on his Swift Takedown special, and it will not hurt when he tries to remove Turn Meter on the Wonder of the Force special. Speed is a critical stat in all areas of the game, even when regulating specific low-speed characters. The Mandalorian (Beskar Armor) will benefit from having a strong Speed stat, but he is not nearly as reliant on high Speed as other characters. Note that his Protective Intuition unique reads “the first time each Scoundrel ally falls below 75% Health, The Mandalorian (Beskar Armor) dispels all debuffs on himself, gains 1 stack of Whistling Birds, and takes a bonus turn, and the cool down of Wonder of the Force is reset.” This is notable because Speed is irrelevant to how this works given it is a bonus turn that is taken, and this is not Turn Meter gain (which can trigger effects with other characters). Added Tenacity is never a bad idea with characters who have really effective special attacks. Mando has a base Tenacity stat of 74% at Gear 13, a strong number, but adding more is certainly going to help ward off those detrimental effects. Finally survivability in the form of Protection is a great place to focus your circle mod and some secondary stats given The Mandalorian (Beskar Armor)’s Wonder of the Force special equalizes the Protection of Scoundrel allies and sees them recover 20% of that original Protection stat. At Gear 13 Mando has just over 52k Protection, so adding to it is wise. Now that we have The Armorer added in SWGoH, adding more Health will also help improve her Protection Up bonus to start battles when she is the leader since we know Protection Up is based on Max Health in SWGoH.

Speed Priority: 3/10 – The Beskar Armor vision of Mando is not one you need to be super fast to be effective, so unless you want a super awesome version of The Mandalorian (Beskar Armor), I would not worry about using top-tier mods (in terms of Speed).

In-game Mod Recommendations: Offense & Tenacity. No disagreement here unless you can find a Health set with high Tenacity, Protection, Offense and Speed secondaries.

The “ideal mod setup” can be interpreted a few different ways, but as I explained above I am suggesting a set of four Offense mods and a set of two Health or Tenacity mods, based on your available mod inventory, with the right secondary stat gains of course. Here are my recommendations for mods on The Mandalorian (Beskar Armor) in SWGoH: