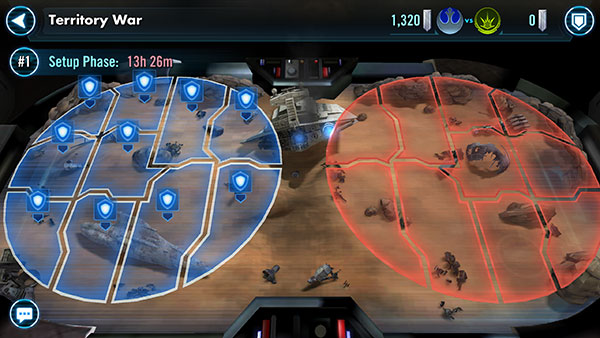 Territory Wars is the game mode in Star Wars Galaxy of Heroes where guilds face off with other guilds to prove their dominance on the holotables. But the way Territory Wars is approached is different based on the guild you are in and how you understand and play the game. While I qualify as an endgame players and have throughout my 4+ years of managing the content here on Gaming-fans.com, the guilds I have been a member of have evolved and changed their attitudes toward this game mode at times. Recently, I joined a Top 10 guild in the game which is part of an alliance that boasts several of the top guilds in SWGoH. This move was something I needed to do for my own gameplay, and to better educate the community on what the top players and guilds do to be successful in SWGoH (besides spend lots of $$$), all while carefully holding onto our alliance’s valuable secrets. That having been said I am confident that my experience in environments that are semi-serious, serious and super-serious about Territory Wars will be of help with the info below. Remember, this is directed at endgame players, so if that is you or where you want to be someday, you can use this as a guide to ensure you have these characters geared and Relic-ed up. And if you are an endgame player with any of these high priority characters sitting at Gear 11 or Gear 12, hopefully this will help you realize their importance in Territory Wars in SWGoH.

These characters are lower on the priority list but can have some situational uses in Territory Wars in SWGoH, whether for situational counters or clean-up. In many cases these characters are under-utilized in the game and because very few have them with high Relics, their effectiveness and relevance in SWGoH is often overlooked.

This list is pretty easy to define – these are the characters you do not need in Territory Wars at the top of the game unless you just want to have fun with them.

* – indicates new character, or a character newly impacted by a new character, while valuable, many guilds have not yet started to require or readily use these characters