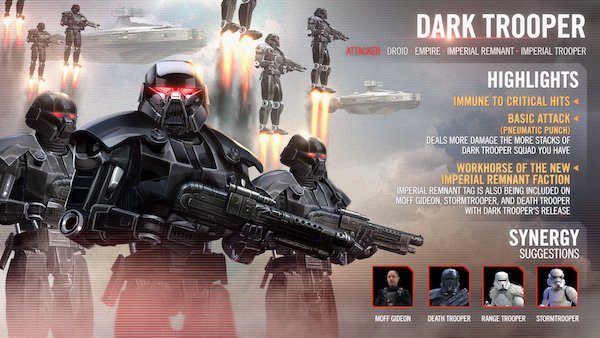 Welcome to another article in our series about Star Wars Galaxy of Heroes where we take a look at the best mods for individual SWGoH toons. While I do not claim to have all of the answers in this game, I do my research and have used every toon I write about extensively. These are mod recommendations based on the character’s kit and actual gameplay to help you in your quest to dominate the Galaxy of Heroes holotables. 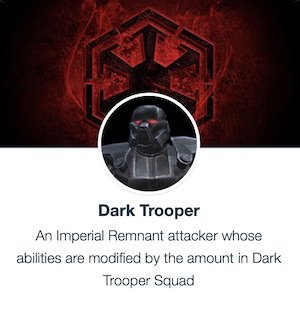 Despite not having much screen time in The Mandalorian’s second season, the Dark Trooper became an instant fan-favorite thanks to the cool design and power seen in the season’s finale. Added to Star Wars Galaxy of Heroes in March 2021, the Dark Trooper brought with it the introduction of the Imperial Remnant faction, a faction of post-ROTJ Imperials that initially included Moff Gideon, Stormtrooper and Death Trooper at the time of Dark Trooper’s addition to the game. Added in a Marquee event, Dark Trooper is a Dark Side Attacker who also fits nicely into the Imperial Trooper faction. Let’s take a look at how we can enhance Dark Trooper’s abilities with mods in SWGoH.

Main Focus: Offense is the main focus I recommend for Dark Trooper as both of his abilities deal Physical Damage, a stat that he ranks in the upper half of the game in. However, on his basic he will attack once per Dark Trooper Squad stack on him, making his basic incredibly powerful.

Additional Areas to Focus: Speed, Defense, Tenacity. Dark Trooper is designed to be a hard hitter, and while you could go the route of Critical Damage, he will only Critical when he has Advantage, so testing will need to take place to see if this is warranted. Speed is never bad, and having Dark Trooper attack often will only benefit your team. Added Defense will help his survivability, especially early when he has a higher number of Dark Trooper Squad stacks given he has +25 Defense for each stack. Finally Tenacity is a good choice to ensure he does not get Ability Blocked, but with such a strong basic he may be okay even without his special in-play.

Speed Priority: TBD – Given the Dark Trooper was just added to the game the importance of Speed will need to be figured out from actual gameplay.

In-game Mod Recommendations: Offense & Tenacity. No disagreement here as new characters almost always have well thought-out mod recommendations by CG. Given the kit and stats a Defense set could be in play as well.

Dark Trooper has an interesting kit that will likely be impacted by the addition of other Imperial Remnant characters in the future. For now, I am choosing to go with either a set of two Defense or Tenacity mods and a set of four Offense mods to gain as much as possible in these areas. I would note that if you use a Defense set to then use a Tenacity-focused cross/plus mod. Thus, here is my preferred mod setup for Dark Trooper: