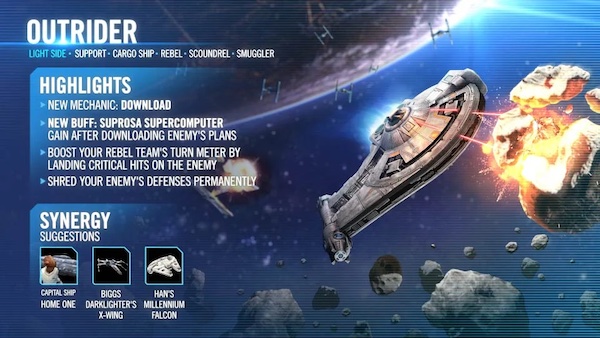 The newest addition to ships in Star Wars Galaxy of Heroes was announced earlier this week, and the Galactic Chase to unlock the Outrider has begun. The Outrider, a non-canon ship piloted by Dash Rendar from the Expanded Universe, and will join the Rebel Fleet. Here is the description from the EA Capital Games Developer Insights post:

The Outrider, Dash Rendar’s YT-2400 freighter, will soon be coming to the holotables and will lift Home One fleets. For those of you who are unfamiliar with this ship, it was originally introduced in Star Wars: Shadows of the Empire on Nintendo 64 on December 3, 1996, and later for Windows on September 17, 1997.
The introduction of this ship brings a few new mechanics to Galaxy of Heroes which we think are exciting: Data Transmission “Download” and new buff “Suprosa Supercomputer”.

The Outrider’s kit is available on the EA SWGoH forums as shards of the new ship will be available through the current Galactic Chase event which runs from April 8th through April 12th.

SWGoH: Should I Buy the Galactic Omicron Materials Bundle?

SWGoH: Inquisitorius characters about to cause a big divide in Galaxy of Heroes