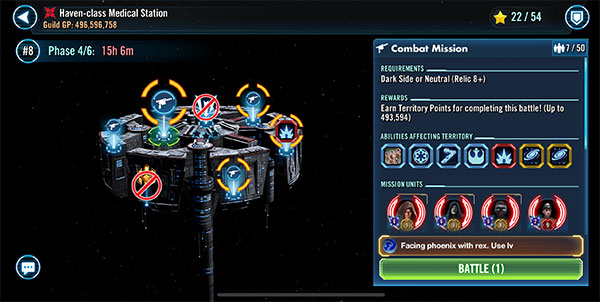 The Rise of the Empire Territory Battle features six Phases which last 24 hours each. Each of the six Phases of the event has a Special Mission rewarding Mk III Guild Event Tokens in Phases 1, 4, 5 and 6 and Reva (Third Sister) shards in Phase 3.

The following is a Walkthrough of my experiences in Phase 4 that will be updated over time. Specifically, this covers the Dark Side Combat Mission at the Haven-class Medical Station at the top in the middle (second one from the left) that requires five Dark Side of Neutral characters at Relic 8 or higher facing Phoenix and Rex.

For more Rise of the Empire strategy guides, stay here at Gaming-fans.com.

My Roster of Characters:

01.12.23 – Riding high after scoring my Reva (Third Sister) shard for the guild again today, I head in with four Imperials and Starkiller. Looking at my other options – General Grievous, Kylo Ren Unmasked, Count Dooku, Wat Tambor and Old Daka, it was between Wat an Starkiller, so here we go.

I am told we fight the Phoenix Squadron and Rex in this battle, but the first wave has Partisan Fighters and some kind of battle-specific thing called Brain Worms. What ever happened to fighting a battle without these stupid modifiers? Anyway, I have Piett mark Royal Guard and 3 shots later he is dead. Then they kill Thrawn so I start trying to clear the Brain Worms and they gang up on Lord Vader and kill him with ease. A Partisan Fighter randomly dies, I call a Commando Droid but he does nothing, Starkiller attacks and they finish me off. That was stupid.

SWGoH: Rise of the Empire – Phase 4 Neutral Combat Mission with Jabba the Hutt

SWGoH: Rise of the Empire – Phase 1 Light Side Combat Mission with Jedi