When the AAT raid arrived it brought with it one of the game’s very best characters in General Kenobi. With only Tier 6 and Heroic variants, the raid required stronger teams and more roster development than the previous raid, Rancor. 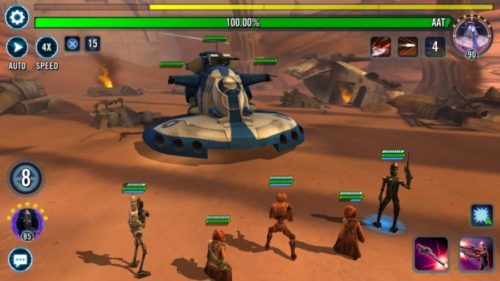 Upon its original launch the raid had a significantly higher health pool than it currently does, Gear 12 and Zetas were not yet part of the game and the phases were extremely challenging. Many phases only had a couple of viable teams, much like when the Sith Triumvirate Raid launched and caused a great deal of panic in the community.

Nowadays this raid has become an afterthought to a majority of the player base, however there are still people out there competing for higher placement and lower level players looking to make a dent in the raid without becoming too sidetracked in the end game development of their account.

The purpose of Gaming-fans.com’s AAT guide is to show teams that can clear phases, teams that can deal big damage and ideal options for the brand new players. While there are full solo teams available – much like Rancor – these tend to require characters, gear and Zetas not easily available to people without many many months gameplay under their belt.

The majority of this guide has been put together by EA GameChanger DBofficial125 and has a full, condensed video guide to go along with it showing examples, gameplay, setups and mod suggestions of all the teams listed for each phase.