While teams have existed that can solo phases of the Heroic AAT for some time now, soloing the entire Tank Takedown Raid was something of a rarity until the release of C-3PO in SWGoH. Now, thanks to the use of the Expose debuff with Rebels and Resistance characters, the chances to solo HAAT are much greater. But different teams have come and gone that could solo the Heroic AAT before being nerfed by the developers at Capital Games.

Below we will take a look at the mechanics of soloing HAAT using some of the teams known to be able to do so at this time. 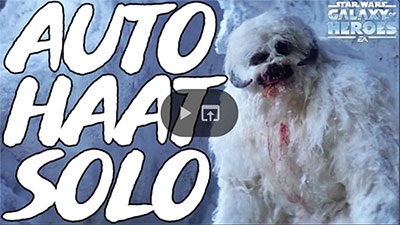 The latest addition to this page is led by Rey Jedi Training (aka RJT or incorrectly called JTR), with BB-8, C-3PO, Commander Luke Skywalker and Wampa. This team, as explained in the video linked in the graphic by fellow SWGoH GameChanger Alumni DBofficial125, takes a bit of setup to kill off Phase 1 before being nearly automatic in Phases 2, 3 and 4. The Confusion debuff from C-3PO is of course the key to stop the gaining of buffs by the HAAT enemies and stop counter attacks and Turn Meter gain. Our Content Director, LJ, has tested this out himself and has found the descriptions from DBofficial125 to be spot-on. In that test LJ was able to complete the full solo of the Heroic AAT (HAAT) in about 33 minutes of time.