The latest update for Star Wars Galaxy of Heroes is the new Tank Takedown Raid. Expected for a Labor Day weekend release, the actual release came on October 21st and the reviews have been, well, mixed. 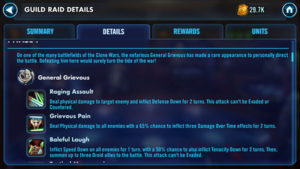 Phase 1 sees General Grievous, two IG-100 MagnaGuards and a B2 Super Battle Droid with crazy fast turn meters, the ability to remove all positive status effects, the ability to expose, block abilities and just plain annoy. Unfortunately for all they do way more than annoy as any group that is not fully geared and leveled up has little hope of even 100k damage. Knock out his helpers you say? Grievous’ sinister laugh brings them back to life making strategy a must.

What is the best strategy to beat up General Grievous and kick off the Tank Takedown in style? Well that is still to be determined as we all work on our own ways. Both Jaws and Jedi have special bonuses in this Raid (but not Clones…) and Ugnaught is a great team member given his evasion against droids. Using Yoda as Leader and his Battle Meditation prevents many of the negative status effects placed by GG and his robotic goons, and the Counter Attack of Ima-Gun Di as Leader, however this Raid requires maxed out rosters that only a PTP (Pay To Play) user will be able to compete with.

We will continue to update this post and add more but your feedback is welcome. Let us know your tips, tricks and ideas and we will gladly credit you as well!

[…] are these Rebels so important to the strategy for the Tank Takedown Raid? Let’s take a look at each character, and we will review Rebel Leader Admiral Akbar as […]

[…] and more in her long fight against tyranny and opression. In SW:GoH, Leia fits nicely in multiple high end HAAT teams, and can be used in lower level Rebel arena teams. For these reasons and more, Leia is a […]

Um….where is an update? Phase 1 strat would be nice.

What exactly are you looking for?