With the changes to Kylo Ren on Star Wars Galaxy of Heroes, many SWGoH players have already been asking if he is now viable in the AAT and HAAT. The answer is yes – kind of.

If you look at Kylo Ren’s unique ability, Unstoppable, you will see that once you use the Omega on it he gains 10 speed for each debuff on him. In addition, when he uses a special ability he gains a single DOT (damage over time) for two turns. In a nutshell, when Kylo is injured/debuffed he gets faster and better. Given the fact that General Grievous and his crew like to apply a variety of debuffs in Phase 1, it would make sense that Kylo Ren is now a viable option in p1.

So the proof is in the pudding they say, so here is some pudding for you (weird saying…). My SWGoH guild just beat the HAAT (Heroic AAT) for the  first time over the weekend and we ran a t6 AAT this week before we move to HAAT permanently. Thus I used this AAT run to test out new toons and teams in Phases 1 & 2. At the recommendation of a Lord Skunk video I have been running Anakin (L) with Aayla Secura, Ahsoka Tano, Qui-Gon Jinn and Ewok Elder and have done so in 8 AAT Raids and 1 HAAT. In Phase 1 of this AAT I ran Anakin (L), with Aayla, Ahsoka, QGJ & Kylo Ren as the only change. 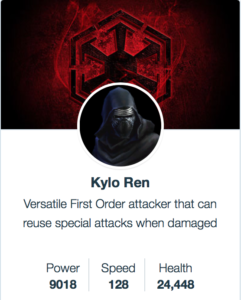 So if we are looking at the big picture, and any top player in Star Wars Galaxy of Heroes must in order to remain highly successful, this is not huge news. However, if you are like me and in a competitive guild looking for every edge you can find, this may be helpful to your cause. Plus, Kylo is freaking cool so I wanted to see how I can get him into my AAT lineup.

02.09.17 Update – We kicked off our final t6 AAT raid today and I ran the same team Anakin (L), with Aayla, Ahsoka, QGJ & Kylo Ren the results were even better. Today’s results, in comparison to my previous high score first mentioned, was a 16% increase.

02.11.17 Update – In my first test on HAAT Kylo came up big scoring a 49k hit late on General Grievous and scored over 40% of the team’s (Anakin (L), Aayla, Ahsoka, QGJ & Kylo Ren) points. Anakin & QGJ are Gear 10, Ahsoka & Kylo Gear 10 and Aayla Gear Level 9. Overall, I saw an increase of 44% from my score in last weekend’s HAAT where my squad finished 2nd overall in my Guild’s first victorious HAAT.

I will report back after the weekend when we take on the HAAT again. If you come up with other phases where Kylo can be better-utilized feel free to share or if you want to write about SWGoH or other games hit us up!

[…] When Kylo Ren got the rework back in late January 2017, I wrote about how the new version of Kylo fit into the AAT/HAAT. Soon thereafter we learned that Zylo could solo Phase 1 of the Heroic Tank Takedown. In addition, […]