Good morning Cybertron! Here’s your preview of the new weekly event in Transformers Earth Wars for 3/3/17-3/6/17!

“Humanity has done it! They’ve brought the experimental Nova Power Plant online giving their people access to nearly unlimited energy! However, vast amounts of energy are bound to attract the attention of those who covet such power…

Project Supernova was formed by a coalition of Earth governments after the arrival of the Autobots and Decepticons. It is humanity’s attempt to harness the scraps of Cybertronian techn

ology they’ve scavenged and use it to humanity’s benefit and defense!

SO it looks like the Insecticons favorite lunch meal is now in game. What does it mean for us? This weeks prizes will reveal more!

This weeks prizes are: 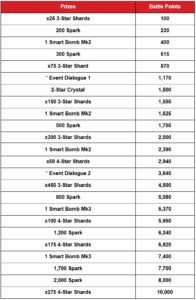 *Achieving this reward will unlock further story dialogue. The dialogue will be triggered once you return to your home base.

It’s a solo event so get your teams ready to rock and roll as you investigate the Nova Power Plant! Have fun! Til all are one!