There is no denying the love of Star Wars throughout the world and that love of the original movies trickled down into a passion for collectibles, memorabilia and more over the years. 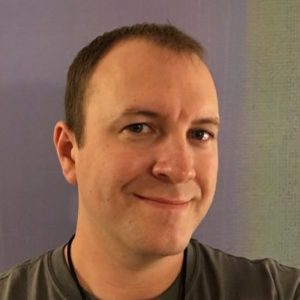 While Star Wars video games have been popular for some time, games on mobile devices continue to see record-high numbers of players and Star Wars Galaxy of Heroes is easily one of the top games on the market today. Gaming-fans.com (Twitter @GamingFansDFN) Content Director Luke Jernigan recently interviewed EA’s SWGoH Community Manager Jesse Anderson (pictured – Twitter @Darokaz) and CG_TopHat from Capital Games in what is expected to be a regular column for the site. Anderson talks about his role with Star Wars Galaxy of Heroes, and both discuss what we have seen thus far and what is to come.

Gaming-fans.com – What is your favorite thing about working for a company like Electronic Arts?
JA – Getting to work on Star Wars content every day is exciting, and getting to share that content with the community is my favorite part of the job.

Gaming-fans.com – From Arena battles and the Galactic War to Guild participation and Heroic Raids, the competition and strategy of SWGoH is amazing and ignites strong emotions from the fans. What is it like being the face of a game that grown men fight over?
JA – It’s fun, but can also be challenging. Every day I read through what the community is talking about, both good and bad. I take this feedback from the community and relay it back to the development team to ensure the players are heard.

Gaming-fans.com – Back in December, I wrote a piece on the next Raid being a Death Star raid using Ships and the reward being Red Five, Luke Skywalker’s X-Wing with a cool Biggs & Wedge synergy. Could we see something like this in the future?
JA – Anything you’ve seen in the shows or movies could possibly be added to SWGoH in the future. We aren’t ready to reveal what our next raid is at this time, but stay tuned for an announcement later this year.

Gaming-fans.com – Our media partner BoboRocket recently theorized that the game level cap will be raised to Level 90 this spring based on past moves by EA. Is this something you see upcoming?
CG_TopHat – At the moment, there aren’t any discussions right now about raising the level cap in the immediate future. We obviously have to throw the flag here though and caveat that this is game development and things can change pretty quickly, so it can never be fully ruled out.

Gaming-fans.com – Will there be a valued reward for the use of Ally Points in the near future?
CG_TopHat – It’s an interesting question about a “valued” reward. Ally Points allow players to participate in the Bronzium pack and get free gear, shards, and credits for just engaging in the game. We know in a world where people are trying to get Raid gear this may seem insignificant, but we’re definitely of the opinion that every little bit helps. At the moment, we don’t have anything planned in the immediate future that uses Ally Points. But as we said earlier, we may pivot and end up using it.

Gaming-fans.com – Related to the Ally Points above, do you see Tournaments having a place in the game’s future?
CG_TopHat – We recently posted about why we discontinued the Tournament structure. In the post, we note that we are exploring what it will take for us to bring back Tournaments. We’ve begun that discussion internally and are presently weighing what it takes to bring Tournaments to the level of quality we want to see versus other features we want our players to experience. It’s a delicate balancing act and we’re excited to see how players react to whatever we decide to do.

Gaming-fans.com – One of the hardest farms in the entire game is General Grievous, yet my own experience and those I know who have him a 6-stars (including my Guildmate Adelka) and higher are all underwhelmed with his abilities. Could we see a rework in the future?
JA – We work in character retunes where we can, such as the Sith rework we did in February. We’ve heard the feedback from the community that they aren’t impressed with his current abilities, so there is a good chance General Grievous will receive a rework at some point in the future.

Gaming-fans.com – Ships were a major update and addition to the game. Are there updates of the same magnitude planned?
CG_TopHat – We can’t say anything unequivocally, but I think it’s fair to say we’re always looking to bring our players awesome new experiences. Just stick with us, there’s more coming.

SWGoH: Ally Points – The Secret World of a Questionable Currency

SUPER weak answers!! Every single answer says the exact same thing: “well, I can’t rule it out, or say yes or no, but we’re looking at doing a lot of cool new things maybe someday.”

How hard is it to give a single straight answer??

@Steve Those weak some answers, no doubt about that. We’re all used to the vague, nebulous responses from EA by now aren’t we?

I chalk it up to the guys at EA being distracted by all of the millions they’ve got pouring in from those Citadel packs, etc.

As for hard hitting journalism, how about asking them how they go to sleep at night knowing they prey directly of people with legitimate gambling addictions? That’s a topic that I’d like to hear more about.

So basically we should scorn casinos for “knowing they prey directly (off) people with legitimate gambling addictions?” Should we also keep clothing manufacturers from making short skirts that ‘obviously’ promote teen pregnancy? I appreciate the comment, but let’s be real here. People make choices. Those choices often define that person. One can choose not to play a game, not to go into a casino or to wear conservative clothing styles. One can also choose the opposite…

As for the “opinion” that every piece of gear is worth something, try playing the game and see how untrue that statement is. They just keep adding characters that require the same vast amounts of gear as the others yet they do NOTHING to provide such gear, rng still sucks ass, the challenge rewards give nothing useful and raid rewards are a joke and a half, I get better raid rewards when I just register as opposed to actually doing any damage.

And the part where he says they read what the community likes and dislikes is a lie, if you speak out on the official forum your comment gets deleted and you get banned no matter how politely you say it. The swgoh reddit sub is filled with the same complaints day in and day out.

EA’s Mobile game Star Wars: Galaxy of Hero’s just decided to Ban thousands of accounts for “hacking” the game when nothing of that nature occured. EA released new content just before the Thanksgiving Holiday which was filled with bugs and errors, one of the bugs was a server error on EA’s side that was causing the awarding of points for free. There was no warning and players could not tell that they were receiving these points (I can provide a video of the bug in effect if you want to see it) .

EA’s response to releasing buggy content was to first tell the players that it could not be fixed until the next week because once an event has launched, it can not be modified.

Then EA’s threatened to ban any account that benefitted from this error (literally thousands or hundreds of thousands did unbenounced to them) and accused the players of using 3rd party software to hack the servers.

4 days later, still during the event EA made a 180 and notified the players that EA can actually update the bugged code and fix the event while it was active, and they fixed their error.

The next day tens of thousands of SWGOH accounts were banned for violating the TOS.

I personally spoke with a rep from EA who assured me that there would be no ban, however I was banned along with many many many others. This is hot and fresh just happened 1 hour ago or less.