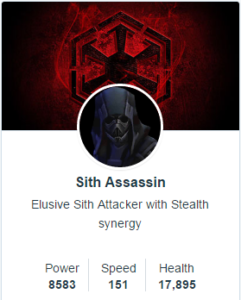 Welcome to the Sith Assassin mods guide, the latest article in a series about Star Wars Galaxy of Heroes where we take a look at the best mods for individual characters. While I do not claim to have all of the answers in this game, I do my research and have used every toon I write about extensively. These are mod recommendations based on the character’s kit and actual gameplay to help you in your quest to dominate the Galaxy of Heroes holotables.

Today I’ll be looking at mods for one of the nameless characters of ambiguous canonicity, the Sith Assassin. Sith Assassin made it into the game with a fantastic skill set which allows her to ignore protection and grant allied Sith turn meter. She also plays a part in both Phase 2 and Phase 4 of the Sith Triumvirate Raid. With the introduction of Darth Revan to the game and the new Sith Empire tag, the Sith Assassin is expected to vault to the top of many players’ lists so be sure to review the mod recommendations below.

Main Focus: As always, Speed is essential, especially to get an early turn meter boost from Dark Shroud. SASS gains Stealth and Foresight for 2 turns when she uses this ability to start a battle, then all Sith allies gain 12% Turn Meter for each buff on her, so 24% TM gain goes to Sith Assassin’s teammates if she goes first in the battle.

Additional Areas to Focus: After Speed, Critical Chance and Offense will maximize Sith Assassin’s protection ignoring damage, making it easier to bring the enemy down fast. Sith Assassin can inflict Stun on her offensive special, Electrocute, and evasion down on her basic, Exploit Weakness, so boosting her Potency is useful. Although Sith Assassin spends a lot of time in Stealth, increasing her survivability through defense as well as flat protection and health secondaries is still important, otherwise she’ll die quickly.

In-game Mod Recommendations: Speed & Critical Chance. No major disagreement here as these are the two stats that, when enhanced, make her kit more powerful. But you may want to consider either Offense or more survivability as the second area of focus after Speed.

Sith Assassin started as a SWGoH character that was used as a nice support on Zeta Maul teams and other Sith-led squads, but never really had a place in any of the previous Sith METAs. However, with the Darth Revan META now here, having a lightning-fast Sith Assassin is incredibly helpful. Thus, here are my mod recommendations for SASS:

SWGoH: Should I buy the Lord of Hunger Pack?

[…] power team for a little more “oomph”, especially when combined with a character like Sith Assassin, who can ignore protection and set up a devastating two hit […]

[…] Today I’ll be looking at mods for the Dathomirian Sith apprentice, Savage Opress. A durable and brutal attacker, Savage is able to kill almost any injured enemy in a single blow, and excels in teams that can ignore protection. […]

[…] in April 2017, Sith Assassin is another nod to the Old Republic and is best played with plenty of Speed from her mods. Given the fact that the last few months of login characters have been somehow related to a recent […]