Welcome to the Best Mods for First Order Officer, the latest article in our series about Star Wars Galaxy of Heroes where we take a look at the best mods for individual characters. While I do not claim to have all of the answers in this game, I do my research and have used every character I write about extensively. These are mod recommendations based on the character’s kit and actual gameplay to help you in your quest to dominate the Galaxy of Heroes holotables. 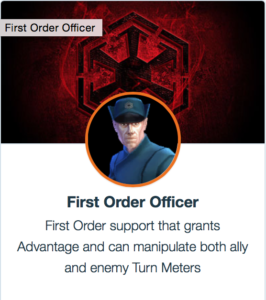 Today’s toon to review mods for will be the First Order Officer, a Dark Side Support character who can grant allies turn meter and buffs and remove turn meter from opponents. While FOO is one of a least-used First Order characters in the game historically, as I said in November 2019, “the new First Order characters added around the debut of The Rise of Skywalker may very well add to his value.” Fast forward to February 2020 and it’s laughable to see those words given how (in)active Capital Games has been as we have had a total of four characters added to support one of the biggest movie releases of all-time… Smh. Let’s take a look at how we want to mod him below.

Main Focus: While every character needs speed (yes, I do say this every time because it is true), the First Order Officer seems best-used with huge speed numbers (280+). Because his marching orders grant a target ally 100% turn meter, if FOO can get the first turn in a battle he can start a chain of events that greatly benefit his allies. With the addition of General Hux (finally) to SWGoH in December 2019, Turn Meter parties starring FOO and Hux can be effective, so test him out after adding as much Speed as possible.

Additional Areas to Focus: Potency, Critical Damage, Critical Chance and survivability. Potency is important because his Pinning Shot special attack has a 70% chance to remove 50% turn meter. Given any TM removal grants allies 15% turn meter, high potency can be of great benefit. Critical Damage is important as FOO’s basic has +20% CD when you have an Omega on it. Thus, if any ally has Advantage, and FOO already has 200%+ CD, he scores a strong critical hit. Critical Chance can help in certain situations like under a Kylo Ren Unmasked lead, and any additional survivability is a plus given First Order Officer is rather squishy. On the survivability side, assumimg you use him under a KRU lead, focus on Health and Protection since “all First Order allies gain 5% Health and 5% Protection when they gain a status effect” under his lead. Note that First Order Officer’s Relic upgrades give him a strong boost in the survivability department, so he will not be as squishy when used to go after the Galactic Legend version of Kylo Ren.

In-game Mod Recommendations: Speed & Potency. No disagreement here, but FOO is one of many who is best suited for Speed mods so good luck getting those high Speed secondary stats.

I am choosing to go with a set of 4 Speed mods and 2 Potency mods to gain as much as possible in these two areas. Here is my preferred mod setup for First Order Officer: