Welcome to another article in a series about Star Wars Galaxy of Heroes where we take a look at the best mods for individual characters. While I do not claim to have all of the answers in this game, I do my research and have used every character I write about extensively. 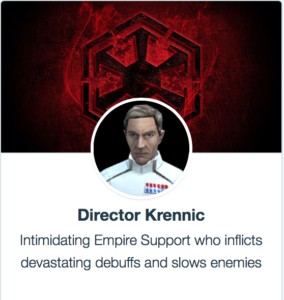 Today’s focus will be Rogue One villain Director Orson Krennic. Described by SWGoH as an “Intimidating Empire Support who inflicts devastating debuffs and slows enemies,” Krennic’s introduction – and the cost to increase his star levels after release – caused quite a stir in the Star Wars Galaxy of Heroes community. However he is now a farmable character on Light Side Hard node 9-D.

Main Focus: (Place broken record onto record player…) Speed. Director Krennic is just like everyone else in SWGoH – he must be fast to be relevant and to maximize his abilities. While I would not suggest a set of four Speed mods, I would say that the addition of an Omicron to his unique ability makes his Speed stat even more important now.

Additional Areas to Focus: Potency, Critical Chance, Critical Damage and survivability are the other areas to focus on given Director Krennic’s kit. I would focus first on Potency since all of his attacks are better with high Potency, but take into account that if Krennic is used as a leader he grants all Empire allies 25% Potency or if used under a Emperor Palpatine lead, he gets a 32% Potency boost. Krennic’s unique already grants him 10% CD for each debuffed enemy and 10% CC for each Rebel enemy, and he gains these bonuses if Death Trooper is present, so focusing on raising CC and CD increases the chance for high damage from his attacks. Survivability is a lower-priority focus just to keep him alive as long as possible to inflict the many debuffs from his attacks.

Director Krennic is another one of those SWGoH toons who greatly benefits from being properly modded. Knowing full well the difficulty of finding the ideal mods in this game, here is my recommended mod setup for Director Krennic:

Reviewed by LJ in February 2022